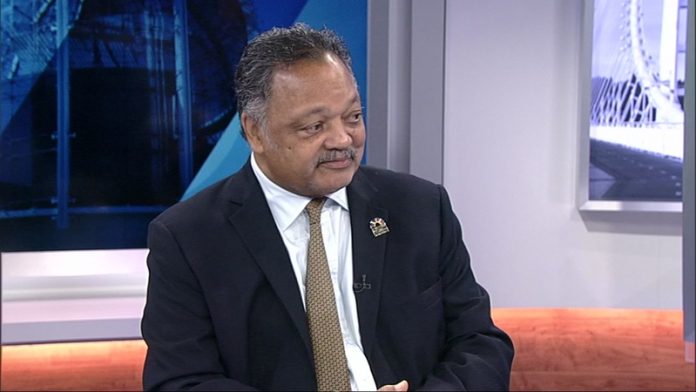 The 79-year-old was rushed to hospital in the Chicago area after suffering from ‘abdominal discomfort’, according to the Rainbow PUSH Coalition, a social justice organization founded by Jackson in 1966.

In a statement released today, the Chicago-based non-profit said that its president had been admitted ‘recently’, but did not say to which hospital.

‘He is in good spirits and will be discharged in a few days. Thank you for your continued love, support, and prayers.’

Jackson, a two-time Democratic presidential candidate, is an icon of the civil rights movement and worked closely with Martin Luther King Jr.

In 2017 Jackson revealed he had been diagnosed with Parkinson’s disease, a neurological disorder with no cure.

At the time, Jackson said his 2015 diagnosis was ‘a signal that I must make lifestyle changes and dedicate myself to physical therapy in hopes of slowing the disease’s progression.’

He said at the time: ‘Recognition of the effects of this disease on me has been painful, and I have been slow to grasp the gravity of it.’

Jackson was diagnosed with the disease in 2015, according to Northwestern Medicine, which also affected his father.

He has been treated as an outpatient in the years since the hospital said.

Jackson was born in Greenville, South Carolina in 1941, married his wife Jacqueline Brown in 1962, and has six children.

He was arrested in 1960 when he was just a college student for advocating for the right to use a public library in his hometown and was known as one of ‘The Greenville Eight’.

On July 16, 1960, while home from college, Jackson joined seven other African Americans at the Greenville Public Library in Greenville, South Carolina, which only allowed white people, and were arrested for ‘disorderly conduct’.

In 1965 he participated in the Selma march with Martin Luther King, which led to further collaboration between the pair.

He was a two-time Democratic presidential candidate nominee in 1984 and 1988.

In May last year, he traveled to Minneapolis to speak after the killing of George Floyd by a white police officer, a death that sparked global Black Lives Matter protests.

Speaking at the Greater Friendship Missionary Baptist Church, Jackson said: ‘We told the governor you must call murder a murder.’

He endorsed Hillary Clinton for president in 2016 and Bernie Sanders last year, after Sanders endorsed Jackson for his own presidential bid in 1988.

On January 8 he was pictured receiving the Pfizer’s BioNTech COVID-19 vaccine.