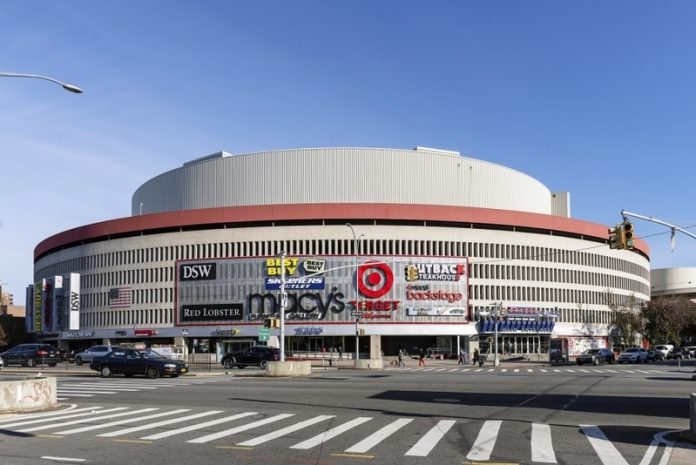 New York City investigators have given the ‘all clear’ after reports of a ‘Tesla containing propane tanks’ near a shopping mall prompted the evacuation of the area.

The Queens Place Mall was evacuated Monday morning after authorities received a call about the suspicious vehicle around 8.30 am.

Video and photos showed a large presence of emergency personnel at 56th Avenue and Queens Blvd.

The NYPD Counterterrorism Bureau’s bomb squad investigated the vehicle and just before 10.30 am gave the ‘all clear’.

According to NBC, the black Tesla, which had stolen Nevada license plates, prompted bystanders to call 911 after seeing a small can attached to the back of it.

There was also a Black Lives Matter sign attached to the can, the network reported. Authorities are still looking for the driver.

Initial reports indicated the can could have contained explosives and was wired up to a propane tank and battery in the parking garage of the mall.

It has also been reported that a dog was removed from the vehicle. Another report stated that the vehicle entered the garage around 2 am.

Officials are still urging New Yorkers to use alternative routes due to road closures and continue to direct foot traffic away from the scene.

A spokesperson for the NYPD confirmed the ongoing investigation at the Queens Place Mall but said no other information about the incident is immediately available.

A shopping mall in New York City has been evacuated due to reports of a ‘Tesla containing propane tanks’ in the area. 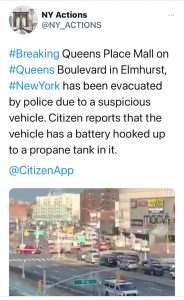 emergency personnel in the area of 56 Avenue and Queens Blvd in Queens.

The shopping center has been evacuated and officials have urged New Yorkers to use alternative routes due to road closures.

In another tweet, NYC Fire Wire shared that the incident is involving a ‘vehicle w/possible explosives’.

Police said the vehicle is parked along Queens Boulevard. A report about the suspicious vehicle came in around 8.30 am. 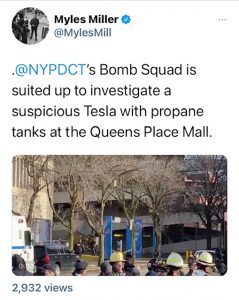 According to a local reporter, the NYPD Counterterrorism Bureau’s bomb squad is investigating ‘a suspicious Tesla with propane tanks at the Queens Place Mall’.

The propane tanks are reportedly connected to a battery.

Video at the scene also shows police officers directing foot traffic away from the area.