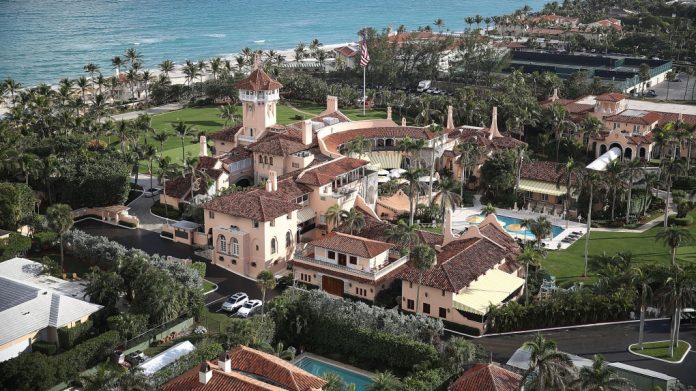 The use of Mar-a-Lago as former President Donald Trump’s permanent home is under legal review by the town of Palm Beach and the arrangement may be discussed at the upcoming town council meeting, the town manager told CNN.

When Trump turned the private residence into a social club, he had agreed with the town to limit his stays at Mar-a-Lago, and now some Palm Beach residents say he is violating that agreement.

Trump bought the former estate of Marjorie Merriweather Post in 1985 and subsequently turned it into a members’ only club in 1993. The plan was — as with most Trump deals — to turn a profit. Yet in order to transform the private residence into a revenue-generating business, Trump had to agree to certain limitations, based on guidelines presented as deal-breakers from Palm Beach.
For example, there could be no more than 500 members, there were rules concerning parking and traffic, and club members — Trump included — could not spend more than seven consecutive days at Mar-a-Lago, or no more than three weeks total a year.

At the time, following several appearances at town council meetings by Trump and his lawyers to plead his case for approval on the evolution of the property, Trump asserted to abiding by the 21-day rule. His signature is on the agreement.

However, Trump had been exceeding that number by staying at Mar-a-Lago far more often while president and CNN reported last month that nearby residents in the posh Florida town were not interested in supporting Trump making the club his permanent home after he left office.

Trump returned to Mar-a-Lago on January 20, 2021, skipping the inauguration for President Joe Biden.

“This matter is under legal review by our Town Attorney, John ‘Skip’ Randolph,” Palm Beach Town Manager Krik Blouin told CNN via email, adding that “Mr. Randolph is reviewing the Declaration of Use Agreement and our Code of Ordinances to determine if former President Trump can live at Mar-a-Lago.”

CNN has reached out directly to Randolph but he has not responded to a request for additional information. It was unclear when the review would be done but Blouin said that the issue may be an agenda item for the upcoming town council meeting scheduled for February 9. An agenda for the meeting has not been publicly posted yet.

The Trump Organization insisted in a statement to CNN in December, “There is no document or agreement in place that prohibits President Trump from using Mar-A-Lago as his residence.”

Many once-loyal members of Mar-a-Lago are leaving because they no longer want to have any connection to Trump, according to the author of the definitive book about the resort.

“It’s a very dispirited place,” Laurence Leamer, historian, and author of “Mar-a-Lago: Inside the Gates of Power at Donald Trump’s Presidential Palace,” told MSNBC. He said members are “not concerned about politics and they said the food is no good.”
Leamer said he spoke to a number of former members who “silently walked out” after Trump left office.