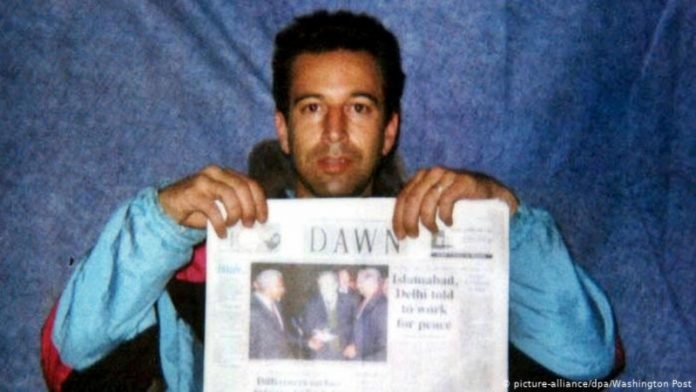 A court in Pakistan has ordered that a British-born Islamist militant charged with the 2002 kidnapping and murder of the Wall Street Journal reporter Daniel Pearl should be freed, his defense lawyer has said.

Ahmed Omar Saeed Sheikh was sentenced to death in 2002 for masterminding Pearl’s murder but the conviction was overturned this year. He has been in jail ever since awaiting the outcome of a series of appeals and legal arguments.

Sheikh’s role in the murder of Pearl has long been disputed. The 47-year-old is known to have been involved in the kidnapping of the journalist, who was investigating al-Qaida in the southern Pakistani city of Karachi when he disappeared in January 2002, but is thought not to have taken part in his killing.

In April the high court of Sindh province found that the murder charge had not been proven, but upheld a seven-year jail sentence for kidnapping. Three other people sentenced to life in prison for their role in the plot were acquitted. The decision stunned the US government, Pearl’s family, and journalism advocacy groups.

Sheikh’s conviction was showcased by Pakistan as proof of its commitment to the US-led war against terrorism, launched after the 9/11 attacks in 2001 that killed 3,000 people in New York and Washington.

Pearl’s murder, which was filmed and the video posted online, may instead have been carried out by Khalid Sheikh Mohammed, the key organizer of the 9/11 attacks, who is being held at Guantánamo Bay in Cuba.

In 2007, US officials said Mohammed, who was systematically tortured after his arrest in Pakistan in 2003, had confessed to personally killing Pearl during a military hearing at Guantánamo Bay.

The Sindh high court’s release order overturns a decision by Pakistan’s top court that Sheikh should remain in custody while Pearl’s family appeal against the acquittal.

Sheikh’s lawyer, Mehmood Sheikh, called for his client to be released immediately.

Faisal Siddiqi, the Pearl family lawyer, said Sheikh would be freed until the appeal was completed but would be returned to prison if the family was successful in overturning the acquittal.

There are separate appeals against the acquittal by the government and Pearl’s family, a process that under Pakistani law could take years. The government has opposed Sheikh’s release, saying it would endanger the public. The supreme court will resume its hearing on 5 January.

Sheikh grew up in east London and was educated at a private school where he gained a reputation for being unruly. The son of a prosperous Pakistan-born businessman, he briefly studied at the London School of Economics before dropping out to join an organization coordinating relief efforts for Muslims during the Bosnian war.

Radicalized by his experience in the Balkans, Sheikh traveled to Pakistan where he joined an extremist group. After several months of training in camps in Afghanistan, Sheikh was sent to India to kidnap tourists to secure the release of a senior militant imprisoned there.

Captured in a police raid, he was imprisoned in India but was released when extremists hijacked an Indian Airlines plane in 1999, and he traveled back to Pakistan.

Sheikh set a trap for Pearl in the first days of January 2002, though his exact motives are unclear. He eventually gave himself up to civilian authorities after Pearl’s death.

According to an authoritative investigation and a 100-page report researched over several years by staff and students at Georgetown University, Pakistani authorities knowingly used perjured testimony to pin the act of murder on Sheikh and his three co-conspirators to achieve a rapid conviction.

“While the four were involved in the kidnapping plan and certainly were culpable, they were not present when Pearl was murdered. Others who were present and actually assisted in the brutal beheading were not charged,” the report concluded.

The kidnapping and eventual execution of Pearl involved three sets of militants, the investigators found: one, led by Sheikh, to abduct the journalist; a second, which kept him, prisoner, in a home on the outskirts of Karachi; and a third, comprising senior figures in al-Qaida, which killed him.

The decision to murder Pearl was taken by Saif al-Adel, an Egyptian militant who was very influential within al-Qaida but virtually unknown to others at the time. Adel is now regarded as one of its most effective operators and is considered a potential successor to Ayman al-Zawahiri as leader of the organization.

The Georgetown investigation revealed that US investigators had found that the pattern of the veins in the hand seen beheading Pearl in the video of his murder closely resembled those seen in images of Khalid Sheikh Mohammed’s hands. The investigators concluded that the al-Qaida extremist had killed the journalist.

The report also found that most of those involved in the crime had escaped justice. Several were killed in clashes with Pakistani security agencies, and one was shot dead by four unidentified men on motorbikes in 2009. Several of the guards who kept Pearl imprisoned, including one who held him down during his execution, have never been fully investigated by Pakistani authorities.

Others have served short prison sentences for other crimes but have never been charged for their roles in Pearl’s murder.

Authorities in Pakistan were embarrassed both by Sheikh’s involvement with a series of Pakistan-based extremist groups prior to the kidnapping of Pearl, and the extensive role of such organizations in the detention and murder of the journalist. Many Islamist extremist factions in Pakistan have received extensive support from the country’s security services over decades.