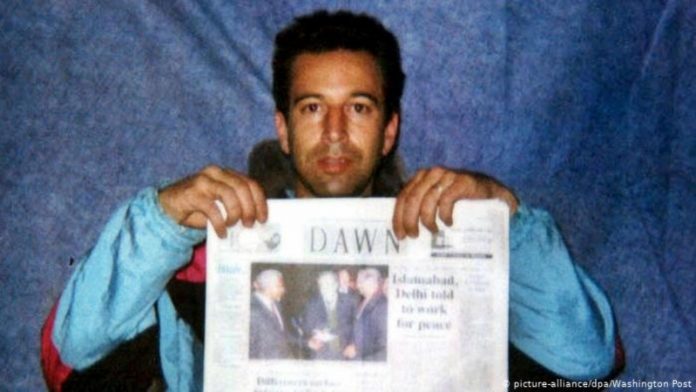 Pakistan’s Supreme Court has ordered the release of four men accused of the murder of US journalist Daniel Pearl in 2002.

Pearl, the Wall Street Journal’s South Asia bureau chief, was kidnapped and beheaded while working on a story about extremist groups in Pakistan.

A British-born alleged militant was originally convicted of masterminding the operation, with three accomplices.

However, Pakistan’s top court has now upheld a ruling acquitting the men.

A lawyer for Pearl’s family said they were in “complete shock”, and the decision was a “travesty of justice”.

Meanwhile, US officials have indicated they will try and launch legal proceedings against the man accused of his murder, Omar Saeed Sheikh, in the US.

What happened to Daniel Pearl?

In the aftermath of the September 11, 2001 attacks on the US, Wall Street Journal journalist Daniel Pearl traveled to Pakistan, working on stories about militant groups. He would end up becoming their victim himself.

First, haunting pictures of him in chains and with a gun to his head were released. Then, he was beheaded. His gruesome death was filmed by the extremists, a grim precursor to the tactics that have now become a common part of the propaganda videos of al-Qaeda and the Islamic State group.

Sheikh, the man accused of his murder, was born in Britain, where he attended a private, fee-paying school in East London, as well as the London School of Economics. However, he was drawn into jihadist circles. In 1994 he was imprisoned in India, after kidnapping a number of Western tourists. He was freed, along with two other militants, five years later, when gunmen hijacked an airliner, forcing it to land in Taliban-controlled Afghanistan, and demanded the men be released in exchange for the passengers.

Sheikh first met Daniel Pearl at a hotel in the Pakistani city of Rawalpindi in January 2002. Using a fake name he pretended to be a follower of a hard-line cleric Pearl wanted to interview. Sheikh promised to arrange a meeting – in fact, he was laying a trap.

When Pearl flew to the port city of Karachi, he was kidnapped. His abductors demanded better treatment for detainees held by American forces at Guantanamo Bay, the return of all Pakistani men being held there, and bizarrely for a militant group, also called for the US to either deliver a consignment of fighter jets that had been promised to Pakistan but then halted, or return the money for them, plus interest. In the end, Pearl was murdered, accused, as an American Jewish man, of being a Mossad agent.

Why were they acquitted?

Following an investigation, Sheikh and three other men were arrested, charged, and then convicted in 2002. There seemed strong evidence that Sheikh had masterminded the kidnapping, having been identified at the hotel in Rawalpindi by two separate eyewitnesses. But the prosecution case was deeply flawed.

It’s widely acknowledged that Sheikh first handed himself over to Pakistan’s powerful intelligence services. However, police and prosecutors attempted to gloss over that, and instead, in spite of overwhelming evidence to the contrary, claimed he had been arrested a week later, wandering around Karachi airport.

What’s more, evidence began to emerge that Sheikh had not physically carried out the murder himself. Instead, it’s now thought a senior al-Qaeda operative currently in Guantanamo Bay, Khalid Sheikh Mohammed (no relation), was responsible. The Pakistani authorities, however, deliberately discounted testimony suggesting that was the case.

Speaking on the condition of anonymity, two former leading figures in the investigation told the BBC of their frustration at how it had been handled. One said the decision to try and brush over discrepancies in the timeline, and ignore evidence suggesting Sheikh was not present at the time of the murder, undermined the rest of the case, even though it was clear Sheikh had orchestrated the abduction.

In April 2020, a high court in Sindh acquitted Sheikh and the other three men of murder.

The ruling was condemned by media rights groups, and the men remained in detention while Pearl’s family and the Pakistani government appealed the decision.

However, Pakistan’s Supreme Court has now dismissed the appeals.

What do Daniel Pearl’s friends and family think?

Journalist Asra Nomani, a close friend of Daniel Pearl’s, who was with him in Karachi before the abduction, led an in-depth investigation into the incident, in conjunction with Georgetown University. Their work substantiated claims that Khalid Sheikh Mohammed carried out the beheading, but she is clear that Omar Sheikh should remain in prison. “There’s one clear and consistent truth,” she told the BBC. “Omar Sheikh is the man responsible for Danny’s kidnapping, and he is the man who set up the circumstances so that Danny was ultimately murdered. So Omar Sheikh is responsible for Danny’s murder.”

Daniel Pearl’s elderly parents, Ruth and Judea, have expressed their dismay at the prospect of the men being released.

In a video statement last year, Ruth Pearl spoke emotionally: “There’s not a single day that we don’t miss our son.” Omar Sheikh’s lawyer, however, has said his client has been cleared of all wrongdoing and deserves to be freed immediately.

Prior to Daniel Pearl’s death, many in the media believed they would be safe interviewing members of militant groups, granted a kind of immunity as neutral observers. His shocking murder changed that and heralded the repeated, deliberate attacks on reporters by extremists that would follow. It is a tragic legacy for a talented journalist.