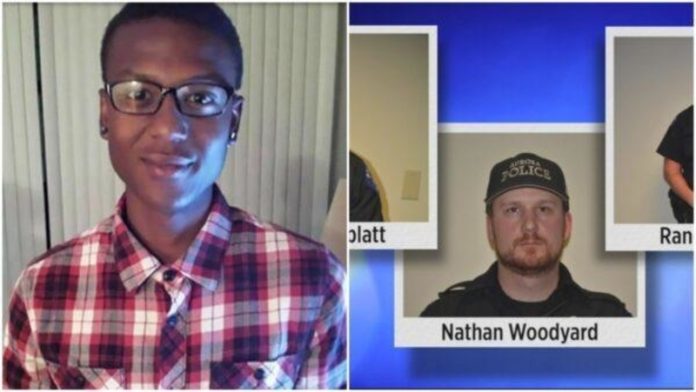 New information has been released about the 2019 in-custody death of a 23-year-old Black man in Aurora, Colorado. While it has been widely accepted the young man died after a violent police encounter, disputes regarding the responsibility for his death have emerged as experts contend his demise was caused by a large dose of ketamine.

According to the Denver Gazette, which filed a motion with the court to publicly release the information, one of the defense attorneys stated multiple medical experts gave grand jury testimony that should clear his client.

The experts testified to the grand jury that when an Aurora Fire Rescue paramedic administered 500 milligrams of ketamine to Elijah McClain that dosage killed him, not the carotid hold inflicted by members of the Aurora Police Department on trial.

Stephen Cina, the forensic pathologist who performed McClain’s autopsy, originally said he could not determine what was the cause of McClain’s death. However, he has changed that opinion and said, “Mr. McClain would most likely be alive but for the administration of ketamine,” adding that he didn’t see “evidence that injuries inflicted by the police contributed to death.”

The court originally blocked the Denver Gazette from publishing what it had learned about Officer Nathan Woodyard’s motion to dismiss, saying it would place grand jury secrecy in jeopardy and interfere with the defendants’ right to a fair trial. But 17th Judicial District Judge Priscilla Loew later vacated her order and allowed the once-suppressed or sealed information to be released.

Woodyard hoped this new information would give grounds to dismiss him from the case. His legal team filed a motion on March 18 asking Loew to dismiss all charges against him. He believes there is no probable cause to support the manslaughter and criminally negligent homicide charges, with his lawyer telling the court there is not sufficient evidence to support prosecuting their client.

Woodyard had no legal standing to authorize an injection of ketamine into the victim, his defense says. The filing maintains Woodyard was not even present when the paramedics gave McClain the shot, claiming the officer took a break from the situation and stepped away unsettled by his physical altercation with McClain, who begged the arresting officers to stop choking him before he lost consciousness.

Before finally saying, “I can’t breathe,” the young man declared he was “an introvert” and was “different.”

His last words, within earshot of Woodyard, were, “My name is Elijah McClain. That’s my house. I was just going home. I’m an introvert. I’m just different. That’s all. I’m so sorry. I have no gun. I don’t do that stuff. I don’t do any fighting. Why are you attacking me?”

The lawyer contends in the documents that if his client had stayed on the scene, he would have not known the proper dose to give McClain because he was not a trained medical professional.

All five defendants have filed motions to have the case reviewed and dismissed citing probable cause.

Judge Loew ruled against Woodyard on procedural grounds, siding with the prosecution by saying the time was not right to request a probable cause review, nor was it an appropriate time to present additional evidence, interpretations, and arguments.

Three years ago, on the night of his law enforcement-involved killing, McClain was walking home from a local convenience store with a ski mask over his face. The three officers stopped him after being alerted of a person acting suspiciously. Despite not having a weapon, a caller believed he was suspicious because he had on the mask and was waving his arms.

Reports show Woodyard was the first to encounter the young man and was later joined by officers Roedema and Rosenblatt. During their effort to detain McClain, Woodard put him in a carotid hold.

McClain vomited while oppressed by the officer. The paramedics were called to the scene to do a welfare check on McClain and concluded he was suffering from excited delirium, a disputed diagnosis said to be characterized by abnormal strength and hyper-aggression.

Because of the diagnosis, Cooper, one of the emergency professionals that arrived on the scene, gave McClain a dose of ketamine too large for his 5-foot-7, 140-pound stature.

Within 18 minutes of meeting Woodyard, McClain lost consciousness, had no pulse, and was not breathing. He was placed on life support until Aug. 30, 2019, days after being declared brain dead.

The motion filed by the attorney never addresses if the officers had a reasonable basis to stop McClain or justification to use physical force when detaining him.

According to a 157-page independent report commissioned by the Aurora City Council, the three officers had a number of missteps when engaging McClain that could have resulted in the man’s life being spared.

Highlights of the investigation said McClain presented to the officers no reasonable suspicion of criminal activity, lending to the argument there was no need to detain him violently. Also, it showed paramedics did not examine or question McClain before injecting him with the drug that contributed to his death.

Another finding was that within the short time period of the paramedics arriving on the scene, there was no clear transition of care or command authority from APD to AFR.

All five defendants are scheduled to return to court in August 2022 for a status hearing on the case.