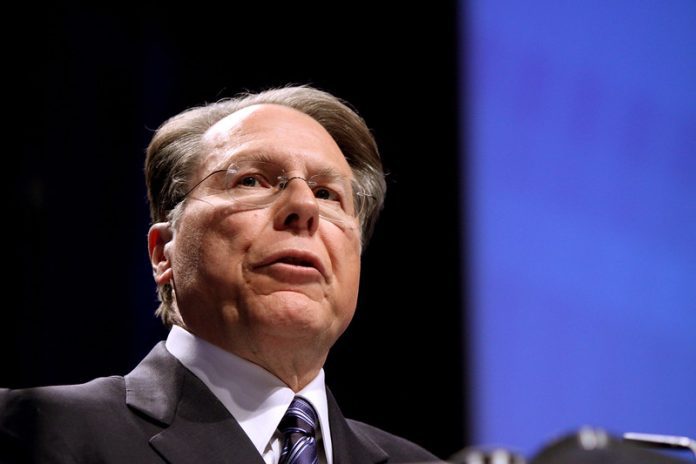 The chief executive of the National Rifle Association and several top lieutenants engaged in a decades-long pattern of fraud to raid the coffers of the powerful gun-rights group for personal gain, according to a lawsuit filed Thursday by the New York attorney general, draining $64 million from the nonprofit in just three years.

In her lawsuit, Attorney General Letitia James called for the dissolution of the NRA and the removal of CEO Wayne LaPierre from the leadership post he has held for the past 39 years, saying he and others used the group’s funds to finance a luxury lifestyle.

She also asked a New York court to force LaPierre and three key deputies to repay NRA members for the ill-gotten funds and inflated salaries that her investigation found they took.

James accused the NRA leaders of flouting state and federal laws and signing off on reports and statements they knew were fraudulent, while diverting millions of dollars away from the NRA’s charitable mission to benefit themselves and their allies.

The attorney general requested that the court bar the four men — LaPierre, general counsel John Frazer, former treasurer Woody Phillips and former chief of staff Josh Powell — from ever serving in a leadership position for a New York charity in the future.

“The NRA’s influence has been so powerful that the organization went unchecked for decades while top executives funneled millions into their own pockets,” James, a Democrat, said in a statement.

Her investigation, which began in February 2019, found a “a culture of self-dealing, mismanagement, and negligent oversight at the NRA that was illegal, oppressive, and fraudulent,” according to a statement by the attorney general’s office.

Her lawsuit paints a picture of widespread wrongdoing at the influential gun rights group, and a freewheeling atmosphere in which top officials repeatedly took advantage of their positions for their personal benefit.

In one new revelation, the attorney general said her investigation uncovered that LaPierre recently arranged a post-employment contract for himself with the NRA worth $17 million. He never sought board approval for the deal, the suit claims.

The lawsuit also claims LaPierre failed to report large sums of personal income to the IRS. James’s office said it found that the NRA chief funneled personal expenses through an outside public relations firm, allowing him to avoid reporting hundreds of thousands of dollars of personal income.

The NRA has defended its spending and contract choices as “decisions that work in the best interests of its members.” Top officials have said LaPierre is paid appropriately for the value he brings to the organization.

In a statement last year, a dozen board members said they have “full confidence in the NRA’s accounting practices and commitment to good governance.”

The scope of the allegations by the New York attorney general represent a serious challenge to the longtime political juggernaut and a top ally of President Trump, which has been riven in the past two years by infighting about use of the group’s funds.

The bitter internal battle burst into public view in April 2019 at the NRA’s annual convention in Indianapolis, when then-NRA President Oliver North was forced out by LaPierre after pressing for an internal financial review.

The Washington Post and other news organizations subsequently revealed how the NRA directed funds to board members and how LaPierre racked up hundreds of thousands of dollars in charges at a Beverly Hills clothing boutique and on foreign travel.

The Post also reported how, after a mass shooting at a high school in Parkland, Fla., Pierre told close associates he was worried about how easily he could be targeted and needed a more secure place to live and sought to buy a $6 million, 10,000-square-foot French-style country estate in Westlake, Tex.

The suit expands on previous allegations that LaPierre improperly charged the NRA for private jet travel and luxury vacation that had no clear business purpose. The filing claims LaPierre billed the NRA more than $500,000 for private charter flights he and his family took to visit the Bahamas eight times over three years.

Last year, a spokesman for LaPierre told The Post his visits to the Bahamas were for NRA business. But the New York attorney general’s investigation found the trips were private vacations.

In four years, LaPierre was reimbursed by the NRA for $1.2 million in expenses that were a personal trip, golf fees, and gifts, the suit claims.

LaPierre also spent $3.6 million of NRA money for private travel consultants to arrange private jets and executive car service for his and his family’s use over just two years, the suit says. And he set aside several millions each year for private security for him and his family.

LaPierre also enjoyed the largesse of NRA vendors who hoped to keep their organization’s business, the suit said. One vendor gave LaPierre and his wife an all-expense-paid trip to Africa for a safari adventure; another frequently loaned LaPierre and his family the use of his 107-foot yacht on his visits to the Caribbean.

Phillips, the former treasurer, is accused in the suit of arranging an NRA deal worth more than $1 million that benefited his girlfriend. The lawsuit also claims that shortly before he retired in 2018, Phillips obtained a contract for himself worth $1.8 million. On paper, Phillips’s contract called for him to provide advice and consulting services for the new treasurer; but the new treasurer said he knew nothing of the contract and never received any services from Phillips, the suit claims.

Powell, LaPierre’s former chief of staff, had his salary increased from $250,000 to $800,00 in just three years as a reward for his loyalty to LaPierre, the suit states and allegedly pocketed an additional $100,000 he was not entitled to as a housing allowance. In addition, Powell also arranged for his wife and father to earn money through NRA contracts.

The lawsuit accuses Frazer, who was general counsel to the NRA, of failing to make sure the nonprofit was governed properly and followed state and federal laws, and it claims he certified false or misleading annual statements.

James said Frazer failed to comply with the rules on board governance, to make sure the board was aware of and voting on major financial transactions and to follow the NRA’s conflict of interest policy.

Under this agreement, the suit alleges, LaPierre and his inner circle of trusted deputies rerouted millions of dollars in lavish personal expenses for themselves, their families and allies through Ackerman McQueen. The goal was to avoid having the board or other members of the NRA know that the charitable organization was paying so much money for LaPierre’s membership fees at golf clubs, private jets and designer suits, the lawsuit said.

Ackerman McQueen then billed the NRA for these large, unexplained sums, calling them “out-of-pocket” expenses, suggesting they were related to the company’s advertising work for the NRA.

The attorney general’s office found that Ackerman McQueen billed the NRA $70 million in just 2017 and 2018 for its public relations work, including “out-of-pocket” expenses.

A very large portion of those hidden expenses were for personal trips and expenses for LaPierre. In a deposition in a separate lawsuit last year, LaPierre acknowledged he did not report any of the NRA-paid expenses as personal income to the IRS and claimed they were business expenses.

In its statement, the attorney general’s office said this practice “did not comply with IRS requirements, and, as a result, all such expenses should have been included by the NRA in taxable personal income for LaPierre.”

The partnership between the NRA and the public relations firm began to crack after James, then a candidate for New York attorney general, announced in summer of 2018 that she planned to launch an investigation of the NRA if she won. LaPierre hired a new law firm, led by Angus McQueen’s estranged son-in-law. That attorney, Bill Brewer, urged that the NRA to audit Ackerman McQueen’s bills in preparation for James’s probe.

At LaPierre’s direction and with Brewer’s help, the NRA ejected its in-house lawyer and sued Ackerman McQueen, accusing them of concealing details of the nearly $40 million the NRA paid the firm each year.

Last spring, North announced in Indianapolis he would not seek a second term as president, warning about exorbitant payments to Brewer’s firm and reports of financial mismanagement.

“There is a clear crisis,” North said in his letter announcing his departure.