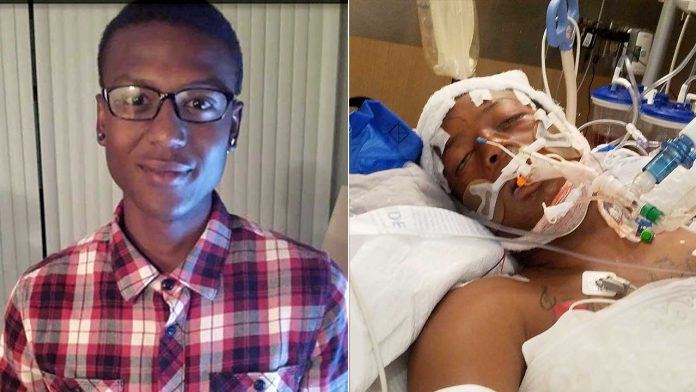 Several medical experts testified to the grand jury investigating the death of Elijah McClain that he died of the 500-milligram dose of ketamine administered by an Aurora Fire Rescue paramedic, and the effects of the carotid hold a police officer subjected him to did not cause his death, according to a filing by the officer’s defense attorneys.

A motion filed March 18 in former Aurora officer Nathan Woodyard’s case requests that an Adams County judge dismiss the indictments against him for lack of probable cause to support charges of manslaughter and criminally negligent homicide.

They each face charges of manslaughter. Assault and criminally negligent homicide are also among the 32 counts.

Woodyard’s attorneys argued that there isn’t enough evidence to support the manslaughter and criminally negligent homicide charges because Woodyard had no authority over the decision to inject McClain with ketamine. They wrote that evidence indicates he wasn’t at the scene when paramedics decided to administer it because he had stepped away out of distress from using force on McClain earlier in the encounter. And since he isn’t a medical professional, he wouldn’t have had any way of knowing the 500-milligram dose would be too much for McClain, they wrote.

Court records indicate the other four defendants have also filed motions for probable cause reviews.

Officers stopped McClain three years ago on August 24 as he walked home from a convenience store, having responded to a report of a person acting suspiciously. On the night of the encounter, McClain wore a ski mask, as he reportedly often did for warmth because of a medical condition, and the caller reported seeing him waving his arms.

However, McClain was not suspected of any crime or reported to have a weapon.

Woodyard was the first officer to make contact with McClain, and he was quickly joined by Roedema and Rosenblatt. He, Roedema, and Rosenblatt subdued McClain, and Woodyard put him in a carotid hold, which is intended to induce brief unconsciousness. Records indicate McClain vomited while restrained.

McClain regained consciousness following the carotid hold and was put on his side in a recovery position, according to Woodyard’s motion.

Cooper and Cichuniec, paramedics from Aurora Fire Rescue called to the scene for a welfare check on McClain following the carotid hold and diagnosed McClain with excited delirium, a diagnosis said to be characterized by abnormal strength and hyper-aggression. Cooper injected McClain with a 500-milligram dose of ketamine, too large for McClain’s less-than-150-pound frame.

By the time McClain went into the ambulance, about 18 minutes after the first encounter with officers, he did not have a pulse and was not breathing. He never woke up and was taken off life support on Aug. 30, a few days after he was declared brain dead.

Judge Priscilla Loew later struck the evidence and arguments presented in Woodyard’s motion, agreeing with prosecutors that the request for a probable cause review was not the proper time to present additional evidence interpretations and arguments. However, filings indicate she will still review the charges for probable cause.

The response to the motion by state prosecutors only asks Loew to strike the contents of the motion and does not include rebuttal to the arguments made by Woodyard’s attorneys.

The forensic pathologist who performed McClain’s autopsy, Stephen Cina, changed his initial opinion that he couldn’t determine what caused McClain’s death, according to the motion for probable cause review in Woodyard’s case. Cina subsequently said, “Mr. McClain would most likely be alive but for the administration of ketamine,” adding that he didn’t see “evidence that injuries inflicted by the police contributed to death.”

Woodyard’s motion doesn’t discuss whether police had a reasonable basis to stop McClain or justification for using physical force to detain him, both issues are called into doubt by an independent report on the incident released more than a year ago. But how they bear on whether the police officers are responsible for McClain’s death should be up to a jury, said Stan Garnett, a former district attorney for Boulder County.

Garnett said that if he were prosecuting the case, he would probably make an argument that McClain would not have been in a position of having ketamine injected had the police officers not stopped him.

“Causation is a common-sense, practical, real-world determination based on the sequence of events,” Garnett said.

Woodyard’s motion also contains excerpts from grand jury testimony by four other medical experts. It indicates some of them said that although the carotid hold and restraint contributed to restricting McClain’s heart and brain functions, the ketamine complicated the effects to cause his death.

Nadia Iovetzz-Tershchenko, a physician with board certification in emergency medicine, said Cooper and Cichuniec deviated from care standards and their guiding protocols, and they did not act in a way expected of a reasonable and prudent paramedic under the circumstances, according to Woodyard’s attorneys.

“Dr. Iovettz-Tershchenko found that Paramedics Cooper and Cichuniec’s ‘failures and deviations from the standard of care were a direct and proximal cause contributing to the death of Mr. Elijah McClain,’” says the motion.

The motion doesn’t mention whether other medical experts testified before the grand jury or gave competing opinions about McClain’s cause of death.

Garnett said a medical worker facing criminal charges for miscalculating the amount of a drug to administer to a patient that they’re otherwise authorized to use is a novel issue presented by the cases against the paramedics. A civil suit for perhaps wrongful death or medical practice is typically what comes up.

“When does that become murder?” he said. “I think that’s where a lot of the legal community is looking at this case, saying are these politically motivated charges where you’re just trying to charge somebody? Or is it really warranted on the evidence? It’s going to be really interesting to watch this play out.”