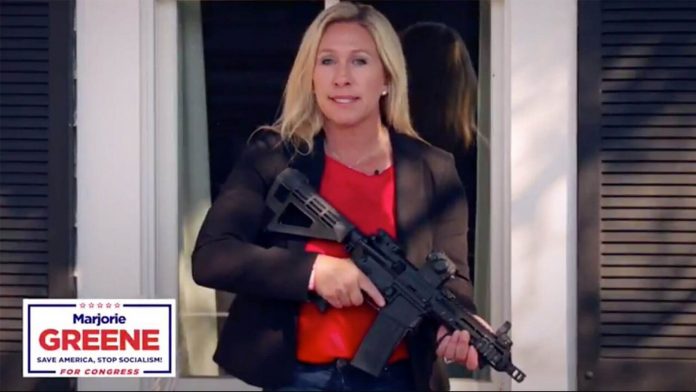 Congresswoman Marjorie Taylor Greene has fired back at conservative PAC The Lincoln Project, accusing the group of being the ‘real traitors’ and ‘Biden’s little tool’ after they turned against GOP leader Kevin McCarthy. 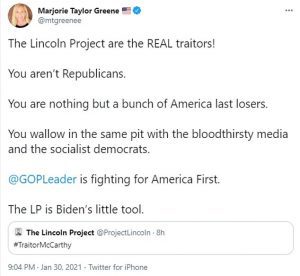 The embattled Georgia Republican, who is facing mounting calls to resign, launched yet another Twitter tirade on Saturday to defend the House Minority Leader after the group tweeted the hashtag: ‘#TraitorMcCarthy.’

‘The Lincoln Project are the REAL traitors! You aren’t Republicans. You are nothing but a bunch of America last losers,’ Greene replied.

‘You wallow in the same pit with the bloodthirsty media and the socialist democrats. [McCarthy] is fighting for America First. The LP is Biden’s little tool.’

The Lincoln Project, which was formed in 2019 by a group of former and current Republicans, and staunchly opposes Donald Trump, has accused McCarthy of destroying the GOP.

McCarthy is also facing pressure from fellow lawmakers to take action against Greene, who has come under fire over her controversial posts and for openly supporting the QAnon conspiracy theory.

Lawmakers have called for Greene to be removed after separate footage surfaced of her harassing a Parkland mass shooting survivor and she showed support on Facebook for executing top Democrats.

Earlier this week Democratic Rep. Cori Bush announced she was moving her office to get away from ‘white supremacist’ Greene after she ‘berated’ her in the Capitol.

Greene has refused to quit saying it was Bush who ‘berated’ her and that Democrats hate her only because she’s ‘a threat to their goal of Socialism’, while she claims to have brought in $1.6 million in campaign donations.

Greene has repeatedly pushed unfounded conspiracy theories including that late Supreme Court Justice Ruth Bader Ginsburg was replaced by a body double, the 2017 Las Vegas massacre that left 58 dead was organized by Democrats and that there is no evidence a hijacked plane hit the Pentagon on 9/11.

Earlier on Saturday Greene announced on Twitter that she had spoken to Donald Trump. 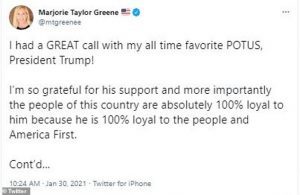 While some Republicans have condemned Greene’s postings, they were hardly a surprise.

Greene has expressed support for QAnon conspiracy theories, which focus on the debunked belief that top Democrats are involved in child sex trafficking, Satan worship, and cannibalism.

Top Republicans denounced her at the time, hoping to block her from capturing the GOP nomination for her reliably red congressional district in northwest Georgia.

The opposition faded, however, when Greene won the primary and was essentially guaranteed a seat in Congress. By the time she was sworn into office, Greene had ridden with President Donald Trump on Air Force One during his final days in office.

Still, there’s greater pressure on political leaders to address extremism after a pro-Trump mob staged a deadly insurrection at the U.S. Capitol.

California Democratic Rep. Jimmy Gomez announced Wednesday night that he was readying a resolution to expel Greene from Congress because of her past social media activity.

In a statement to Axios, a spokesman for House Republican leader Kevin McCarthy called the posts ‘deeply disturbing’ and said McCarthy ‘plans to have a conversation with the Congresswoman about them.’

It’s unclear when that conversation may happen. McCarthy flew to Florida on Thursday to meet with Trump at his Mar-a-Lago resort.