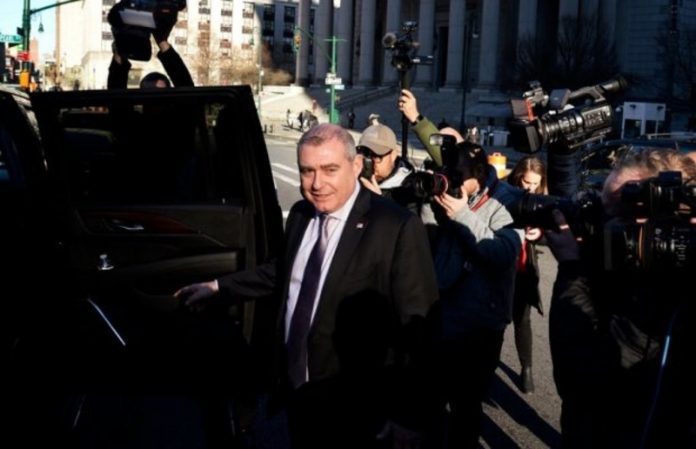 Lev Parnas, the indicted Ukrainian-born businessman whose affiliation with Rudolph W. Giuliani became a focal point during President Trump’s impeachment, has asked a federal judge to order the administration to turn over records he hopes will show his arrest was part of an elaborate plot to protect the president.

Attorney Joseph Bondy argued in court papers unsealed Tuesday that the timing of Parnas’s arrest in October 2019 was consistent with a pattern of behavior exhibited by the Justice Department under the leadership of Attorney General William P. Barr, who critics have accused of leveraging the power of his office in deference to Trump and his interests. Bondy’s filing cites Barr’s intervention in the cases of Roger Stone and Michael Flynn, Trump allies swept up in special counsel Robert S. Mueller III’s investigation of Russian interference in the 2016 election.

A spokeswoman for Barr did not immediately respond to a request for comment. A spokesman for the U.S. attorney’s office in the Southern District of New York, which is overseeing Parnas’s prosecution, declined to discuss Bondy’s allegations.

Barr is scheduled to depart the administration Wednesday, having announced his resignation last week amid a refusal to take action on Trump’s baseless claims of widespread election fraud and in other matters, the president believes cost him reelection.

Last month, Parnas pleaded not guilty to charges he defrauded investors in a start-up called Fraud Guarantee, a business that prosecutors have said was defunct but purported to offer fraud-protection services to other companies. His business partner in that endeavor, David Correia, has already pleaded guilty. Parnas and Correia, along with associates Igor Fruman and Andrey Kukushkin, were initially charged last year in a campaign-finance scheme in which prosecutors allege foreign donations were funneled to candidates in the United States.

Bondy, in his 55-page submission to the court, argued that “as part of an intervention” by Barr, federal prosecutors in Manhattan elected to bring Parnas and his alleged accomplice Fruman into custody at Dulles International Airport “to time Mr. Parnas’s indictment and arrest to thwart him from being able to provide evidence to Congress during the Impeachment Inquiry of President Donald J. Trump.”

Parnas never appeared as a witness during Trump’s impeachment, though he did make a staged appearance on Capitol Hill at the time.

Parnas teamed with Giuliani to hunt for information in Ukraine they believed would damage Trump’s opponent, Democrat Joe Biden, in the months leading up to November’s election. Parnas, a naturalized U.S. citizen who lives in Florida, is also said to have played a role in efforts to oust Marie Yovanovitch from her post as U.S. ambassador to Ukraine.

Trump was impeached by the Democratic-controlled House, which alleged his administration withheld approximately $400 million in aid to Ukraine pending an announcement from the leadership in Kyiv that authorities there would investigate Biden and his son Hunter. The Senate promptly acquitted Trump.

Bondy has argued that the Justice Department is obliged to turn over internal communications, including any exchanged with the White House, that may shed light on whether Trump and Barr held sway over the timing of Parnas’s arrest. Bondy argued that prosecutors should have to disclose “whether there was any involvement or influence” by Barr “in any decisions in this case.”

The attorney asked U.S. District Judge J. Paul Oetken to order the government to produce emails, texts, memos, or any other written information regarding Parnas between Justice Department officials and Barr, the White House, Trump, or others on his behalf.