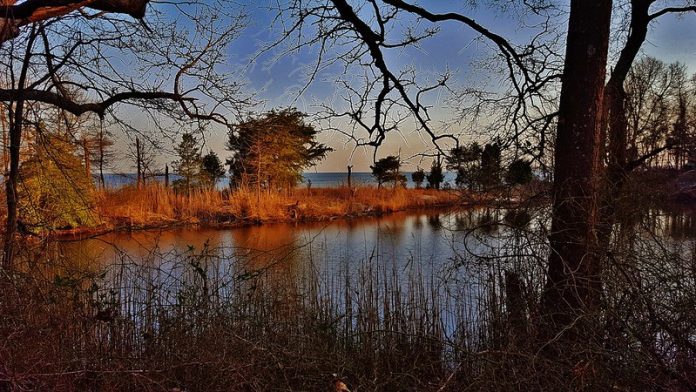 Two boaters who went missing in the Chesapeake Bay near Annapolis on Thursday evening have been identified as Maeve Kennedy Townsend McKean, 40, and her 8-year-old son Gideon Joseph Kennedy McKean.

David McKean confirmed his wife and son disappeared on Thursday afternoon while in a canoe on the Chesapeake Bay. In a brief interview with The Washington Post, he said the family had gathered at a waterfront house owned by his wife’s mother, Kathleen Kennedy Townsend, in Shady Side, Md.

At about 4 p.m., children were kicking a ball back and forth in a yard and the ball went into the water.

He said his wife and son “popped into a canoe to chase it down. They just got farther out than they could handle and couldn’t get back in.”

At a news conference Friday afternoon, Maryland Gov. Larry Hogan (R) said he had reached out to Kennedy Townsend and “expressed our most heartfelt sympathy and prayers to her and her entire family at this difficult time.”

A spokesman for the U.S. Coast Guard said the wind in that part of the bay was at 26 knots — about 30 mph — Thursday afternoon, with waves two to three feet high.

McKean said he has been told the search is continuing. He would not say whether the canoe has been found, but the Maryland Department of Natural Resources police said Friday that an overturned canoe matching the description of the one went missing was recovered.

Capt. Erik Kornmeyer, a spokesman for the Anne Arundel County Fire Department, said in a statement that a concerned person called authorities around 4:30 p.m. Thursday to say he saw the canoe from the Columbia Beach pier.

According to the Coast Guard, the caller said that the boaters were “seen struggling to return to shore in a canoe” near Herring Bay and then not seen again.

Crews on boat and helicopters engaged in the search until dark Thursday and resumed Friday morning. By Friday afternoon, the Coast Guard said 2,275 square miles had been covered.

“At this time, our family asks for privacy and that everyone keeps Maeve and Gideon in their prayers,” family spokesman Alan Fleischmann said in a statement. Maeve is Fleischmann’s goddaughter.

McKean graduated from Boston College and Georgetown University with a joint degree in law and international conflict resolution. She served in the Peace Corps in Mozambique, coming home to help with her mother’s 2002 campaign for governor. She went on to work for U.S. Sen. Dianne Feinstein in California — where she met her future husband. Gideon is their first child; the pair of human rights lawyers named him after a Supreme Court case ordering states to pay for defense attorneys for the poor.

During the Obama administration McKean worked in the State Department’s global AIDS program and on human rights in the Department of Health and Human Services.

Last year, she and her mother spoke out openly against her uncle Robert F. Kennedy Jr.’s anti-vaccine advocacy.

“We stand behind him in his ongoing fight to protect our environment,” they wrote in a Politico column. “However, on vaccines he is wrong.”

The Kennedy family has been beset by tragedy, from the assassinations of McKean’s grandfather and great-uncle to the death of her cousin Saoirse Kennedy Hill last year. While they are also widely seen as blessed by fortune, McKean told Glamour in 2008 that was a misconception.

“People think, because I’m a Kennedy, I’m extremely wealthy and don’t flaunt it. Ha!” she said. “I have a great name, but by the time you get to the fourth generation, the money’s run out. We’re fortunate compared to the average American, but to think I’m a trust fund kid — so not true!”

Washington Post: Member of Kennedy family and her son identified as missing boaters in Chesapeake Bay