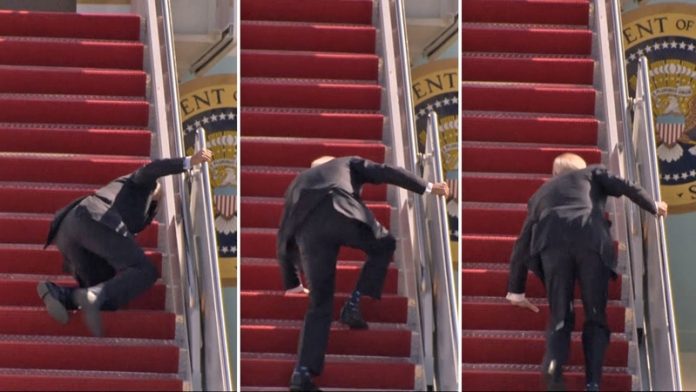 President Joe Biden stumbled three times and fell on the steps of Air Force One on Friday, prompting fresh questions about his health.

The 78-year-old – the oldest president in US history – appeared to struggle as he boarded the presidential plane.

It was not immediately clear what tripped Mr Biden up the first time, but shortly after recovering, he fell twice more before dusting himself off. Security officials, meanwhile, looked on with concern from the ground.

The president recovered to give a salute at the top of the stairs before departing to meet with Asian American community leaders in the wake of the massage parlor massacre in Atlanta, Georgia.

Reporters traveling with Biden said it had been a windy morning at Joint Base Andrews in Maryland, where Air Force One took off.

The White House said he “is doing 100 percent fine” after his fall.

“I know folks have seen that President Biden slipped on his way up the stairs to AF1, but I’m happy to report that he is just fine and did not even require any attention from the medical team who travels with him,” said Kate Bedingfield, White House Communications Director. “Nothing more than a misstep on the stairs.”

In November, the commander-in-chief suffered a hairline fracture in his right foot while playing with his rescue dog Major, requiring him to wear an orthopedic boot for several weeks.

President Biden, who has said he uses a Peloton bike to keep fit, often makes a point of jogging in a show of his fitness.

Throughout the election campaign he has engaged in numerous malapropisms, slurred words, mispronouncing words, and misidentifying people, such as calling his wife Jill his sister.

A senior pro-Kremlin politician in Russia accused Biden of having dementia on Thursday, striking back after the US president called his counterpart Vladimir Putin a “killer”.

Republican detractors have long claimed the president is suffering from senility.

“I remember the press bashing Trump for touching the rail once,” tweeted a gleeful Donald Trump Jnr, sharing the clip of the incident. “Biden falls repeatedly but I’m sure he’s the picture of health. No wonder all our enemies are pouncing simultaneously and mocking him publicly.”

The president’s latest medical report showed no signs of any degenerative disease.

Biden survived two brain aneurysms in the late 1980s — one did not rupture. And while the condition was later complicated by subsequent deep vein thrombosis and pulmonary embolism, his doctor at the time stated there were no serious threats to his health and medical conditions.

Despite this, a new poll shows the number of Americans who approve of Biden has grown steadily since he took office, according to Reuters/Ipsos polling released on Friday, driven by concrete steps his administration has taken to address the public health and economic crisis caused by the coronavirus pandemic.

The March 17-18 national opinion poll found that 59 percent of adults in the US approved of Biden’s overall job performance, while 35 percent disapproved and 6 percent said they were not sure.

The number of adults who approve of Biden is up by about 4 percentage points since a poll that ran in late January, and the increase is largely due to a rise in Biden’s popularity among independents.

Biden and Harris will later meet community leaders and state lawmakers from the Asian-American and Pacific Islander community in Atlanta, Georgia, to hear concerns about the killings and discuss a rise in anti-Asian hate crimes.