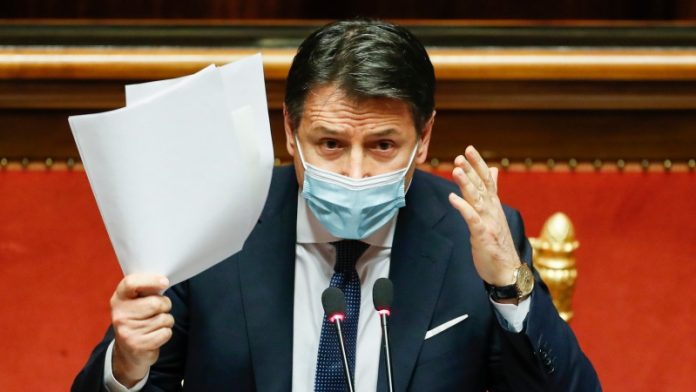 Conte was originally chosen as a compromise candidate in 2018 by the leaders of two of Italy’s largest parties, The League and Five Star. Both parties had aggressive domestic agendas and an arrangement was created which had Conte as Prime Minister with the leaders of each party in a prominent subordinate position – The League’s Matteo Salvini as Deputy Prime Minister and Minister of the Interior and Five Star’s Luigi Di Maio as Deputy Prime Minister and Minister of Foreign Affairs. Conte, a private law professor who was politically outspoken, intelligent, sympathetic to the concerns of both parties but not tied to either seemed like a perfect choice.

Internal frictions between the two groups grew, as Salvini used his position to gain greater influence among the populace. In 2019, he attempted to leverage his increasing popularity into a political takeover of the government, trying to force the leadership of Five Star out; the attempt failed after Conte resigned in August 2019, forcing an immediate reassessment by the different elected factions regarding a new leader. In the shuffle that followed, which included a new party being formed by a prior Italian Prime Minister, Conte again gained enough support to be reinstated in his leadership role… this time, in charge of a center-left coalition of a number of smaller parties.

He received high marks from the population of Italy for his handling of the COVID-19 crisis. Despite the ravages of the disease, he was commended for his rapid action and attempts to react to new information as it became available, as well as the decline in cases as the population became familiar with preventative techniques.

That popularity has waned in recent months, as the country has faced difficulty from the economic fallout from the continuing health crisis. The disease hasn’t been eliminated in Italy, and after a year of job losses and social restrictions, Conte is losing support from some of the members of his coalition.

The resignation today is, somewhat paradoxically, an attempt by Conte to stay in power. By resigning, he again creates a situation where some fluidity is introduced to the governmental organization. With his removal, the leaders of the various Italian political parties will meet and discuss who they feel would be best to represent the interests of all of them and the Italian people. Conte is counting on them deciding that he continues to best fit that role.