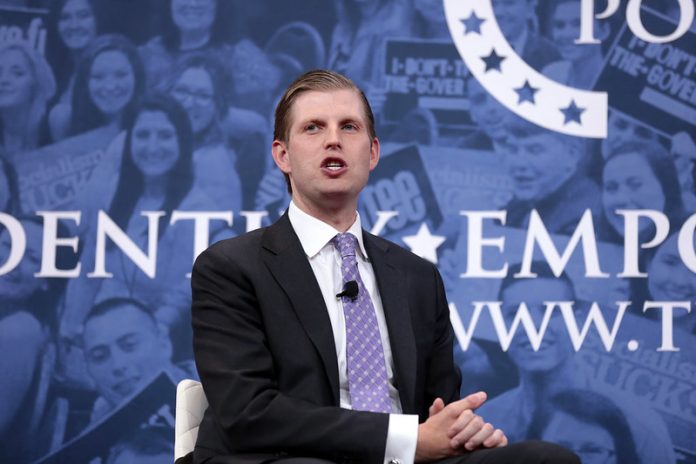 In a revelation Tuesday, April 21, 2020, that swiftly elicited allegations of corruption, the New York Times reported that President Donald Trump’s family business—from which he has refused to divest—is seeking rent relief for his infamous D.C. hotel from his own administration, as the global hotel industry continues to struggle with the financial fallout of the coronavirus pandemic.

Oh, hi, corruption,” tweeted television writer J. Holtham. Journalist Renee Montagne said she was “not sure whether to laugh or cry.”

“No swamp to drain here, folks. Move along,” remarked Tim Karr of Free Press, referencing one of Trump’s campaign pledges from 2016.

The 263-room Trump International Hotel is operated by the Trump Organization within a federally owned building mere blocks from the White House on Pennsylvania Avenue. The president’s company negotiated a 60-year lease for the space in 2013 and pays the U.S. General Services Administration (GSA) almost $268,000 per month.

Although the Trump Organization announced plans to sell the hotel lease last year, the company’s sales representative Jeffrey Davis confirmed to the Washington Post in late March that sale plans were now on hold because of how the pandemic has affected the commercial real estate industry.

As the Times reported Tuesday:

“The Trump Organization is current on its rent, according to Eric Trump, the president’s son, but he confirmed that the company had opened a conversation about possible delays in future monthly payments.

The younger Mr. Trump said the company was asking the GSA for any relief that it might be granting other federal tenants. The president still owns the company, but his eldest sons run the day-to-day operations.

“Just treat us the same,” Eric Trump said in a statement on Tuesday. “Whatever that maybe is fine.”

The newspaper noted that “the Trump Organization was barred by Congress from seeking relief from the $500 billion rescue fund being administered by the Treasury Department, and a Trump Organization executive said on Tuesday that the company had decided not to apply for a federal loan through the Small Business Administration. The company argues that it is seeking only temporary relief from the GSA while the hotel industry globally copes with an extraordinary drop in business.”

Trump’s White House and the GSA didn’t respond to the Times‘ requests for comment.

However, political commentators, journalists, and advocacy groups were quick to weigh in:

Critics often pointed to previous arguments that Donald Trump’s continued ownership of the hotel runs afoul of the U.S. Constitution’s emoluments clause, given that it has been frequented by special interest groups and foreign officials throughout his presidency.

The Trump Organization hasn’t just sought relief from the GSA during the public health crisis.

The company has been talking with Deutsche Bank, the president’s largest creditor, about the possibility of postponing payments on its loans from the bank,” according to the Times. “Mr. Trump owes Deutsche Bank more than $300 million on loans connected to the Washington hotel, his Doral golf resort in Florida, and a skyscraper in downtown Chicago.”

In Florida, the Trump Organization in late March sought guidance from Palm Beach County about whether it had to continue making monthly payments on land that the company leases for its 27-hole Trump International Golf Club in West Palm Beach, according to people briefed on the discussions and documents reviewed by the New York Times.

This month, the Trump Organization was about a week late on its monthly lease payment of about $88,000, according to county documents. Company executives are still seeking guidance from Palm Beach County about whether they are expected to keep making lease payments with the golf industry shut down.

Eric Trump confirmed ongoing negotiations with Palm Beach County to the Times and echoed his comments regarding the GSA request.
“In Florida, the very county that mandated we close is the very county collecting rent,” he said. “What are they doing for others? Just treat us the same.”