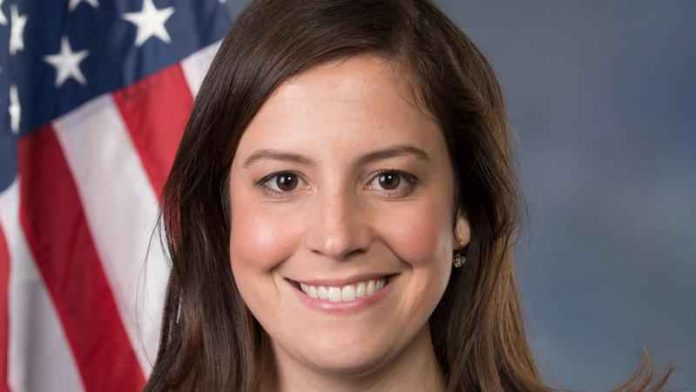 New York Republican Rep. Elise Stefanik’s getting the boot from the Harvard Institute of Politics.

The school announced Tuesday, January 12, 2021, that the four-term congresswoman from upstate New York and strong supporter of President Trump was removed from its Senior Advisory Committee in the wake of last week’s attack on the U.S. Capitol due to her “public assertions about voter fraud in November’s presidential election that has no basis in evidence.”

“She has made public statements about court actions related to the election that are incorrect,” Harvard Kennedy School Dean Douglas Elmendorf added in a letter. “Moreover, these assertions and statements do not reflect policy disagreements but bear on the foundations of the electoral process through which this country’s leaders are chosen.”

Stefanik joined nearly 150 fellow House Republicans in supporting Trump’s unsuccessful push to reverse his presidential election defeat at the hands of President-elect Joe Biden. Their votes came after the storming of the Capitol hours earlier on Wednesday by supporters of the president who were encouraged by Trump to march to the Capitol and show strength as they protested congressional certification of the election.

Elmendorf said in his letter that the school originally asked Stefanik to resign from the committee, and when she declined, “I told her that I would therefore remove her from the IOP’s Senior Advisory Committee at this time.”

Firing back, the congresswoman called her removal by Harvard University as “a rite of passage and badge of honor.”

“The decision by Harvard’s administration to cower and cave to the woke Left will continue to erode diversity of thought,” Stefanik tweeted. “The Ivory Tower’s march toward a monoculture of like-minded, intolerant liberal views demonstrates the sneering disdain for everyday Americans and will instill a culture of fear for students.” 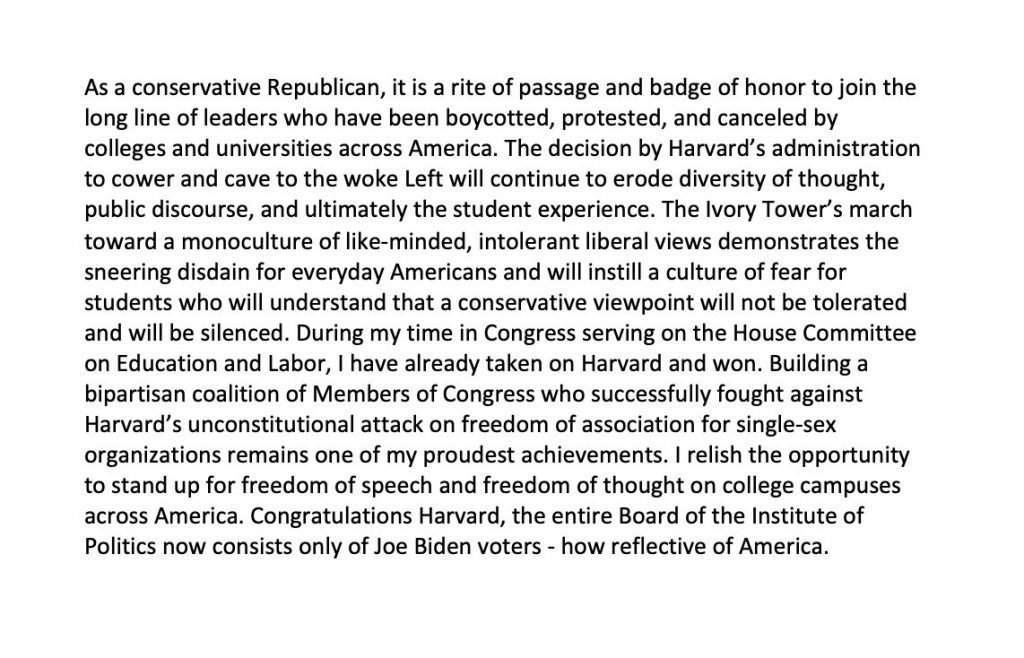 Stefanik has resisted calls since last week’s insurrection at the Capitol to resign.

The congresswoman, who kept her distance from Trump during the 2016 election, has in recent years become one of his strongest backers in the House and spoke at last summer’s Republican National Convention. She’s been considered a rising star in the GOP.

Elmendorf spotlighted “her important contributions to the crucial mission of the Institute of Politics over a long period, beginning with her role as a student leader (she was in the class of 2006) and continuing to her mentoring students and strengthening the IOP’s programming in many ways. I know that we are grateful for her long and committed service.”