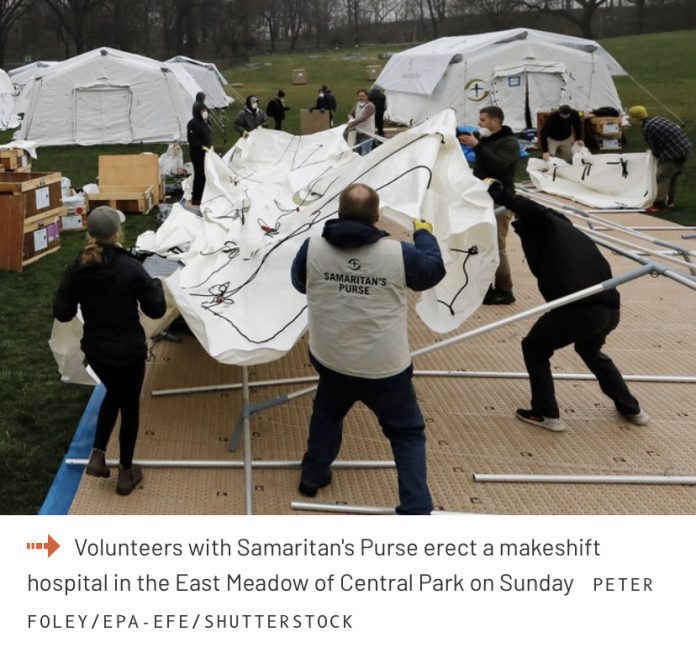 The mayor did not mention that the group is led by Franklin Graham, a notorious anti-LGBTQ and Islamophobic preacher with a track record of using humanitarian missions to proselytize an evangelical agenda.

Graham, the son of prominent minister Billy Graham, has specifically sought to recruit Christian medical staff to the Central Park facility. According to the group’s website, all volunteers, including health care workers, should read and adhere to a statement of faith, in which marriage is defined as “exclusively the union of one genetic male and one genetic female” and the unrighteous are sentenced to “everlasting punishment in hell.” 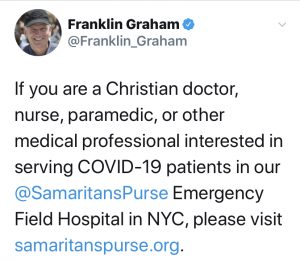 Asked whether the Mayor’s Office considers this problematic, a City Hall spokesperson said the field hospital will operate as a Mount Sinai facility, and must adhere to the hospital’s policy against discrimination. The spokesperson did not say whether the city was concerned that volunteers on the project are expected to agree with the group’s anti-gay faith statement.

“Our record on human rights is clear; and we are confident that the joint effort by Mt. Sinai and Samaritan’s Purse will save New Yorkers’ lives while adhering to the values we hold dear by providing care to anyone who needs it, regardless of background,” said Jane Meyer, the City Hall spokesperson.

Still, some New Yorkers said they were leery of receiving care from a fundamentalist group whose own members believe their sexual orientation is sinful.

“I don’t want to demonize people who are volunteering their time, but it is a concerning thing,” said Amy Martin, a Brooklyn resident and former nursing assistant.

“On the one hand, this is absolutely an all hands on deck situation,” she continued. “On the other hand, as an LGBT New Yorker, I would be hesitant to make that my first choice of care. I’d much rather be seen anywhere else.”

Samaritan’s Purse, which holds a reported $650 million in net assets, has a lengthy history of using disaster aid to spread their agenda. A campaign known as Operation Christmas Child, which delivers gift boxes to children in Muslim countries, has been criticized as a conversion scheme.

Back in 2001, the Times reported that the group had “blurred the lines between church and state” while using $200,000 in federal money to help victims of an earthquake in El Salvador.

More recently, Franklin Graham spoke at President Trump’s inauguration, claiming that God had intervened in the election to make him president. Afterward, Samaritan’s Purse received $1,000,000 in donations from the Presidential Inaugural Committee.

Graham has also claimed that Barack Obama “allowed the Muslim Brotherhood to become part of the US government”; praised Vladimir Putin for “protecting children from any homosexual agenda”; and railed against the “transgender lie”

In a statement on Monday, State Senator Brad Hoylman called on the preacher to publicly assure LGBTQ New Yorkers that they would receive the same treatment as all other patients.

“COVID-19 doesn’t discriminate, and neither should Franklin Graham,” he said. “It’s unacceptable that a New Yorker infected with COVID-19 could be subjected to discriminatory treatment from an organization whose leader calls us ‘immoral’ and ‘detestable.’”