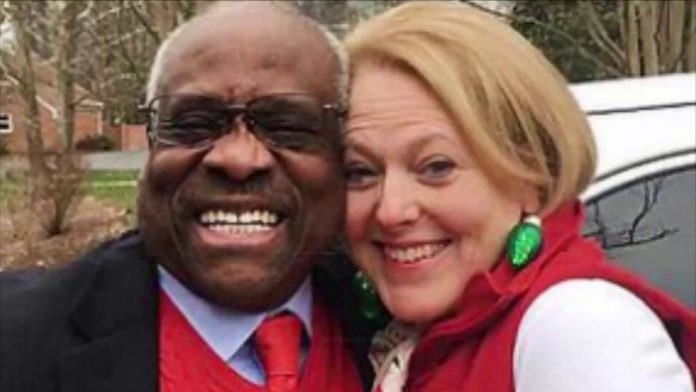 On Wednesday morning, Ginni Thomas—wife of Supreme Court Justice Clarence Thomas—endorsed the rally in Washington demanding that Congress overturn the election. She then sent her “LOVE” to the demonstrators, who violently overtook the Capitol several hours later. Two days later, Thomas amended her post with the addendum: “[Note: written before the violence in US Capitol].” By that point, five people involved in the insurrection, including a Capitol Police officer, had died. 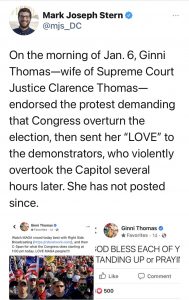 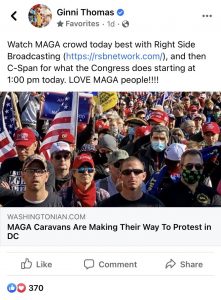 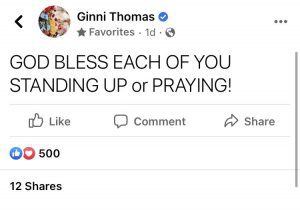 Thomas, a conservative lobbyist and zealous supporter of Donald Trump, has fervently defended the president over the last four years. On her Facebook page, she frequently promotes baseless conspiracy theories about a “coup” against Trump led by Jewish philanthropist George Soros, a frequent target of anti-Semitic hate. Thomas draws many of these theories from fringe corners of the internet, including an anti-vax Facebook group that claimed Bill Gates would use the COVID vaccine to kill people. In recent months, she also amplified unsubstantiated corruption claims against Joe Biden while insisting, falsely, that the Obama administration illegally spied on Trump’s 2016 campaign, then tried to rig the election against him.

In turn, Trump has rewarded Thomas with an extraordinary amount of access to the Oval Office. Her advocacy group Groundswell got an audience with the president in early 2019. According to the New York Times, the meeting was arranged after Clarence and Ginni Thomas had dinner with the Trumps. (Clarence Thomas and Trump appear to be quite friendly: The justice took his clerks to meet with the president in the Oval Office at least once; Ginni attended as well.) At the White House, Groundswell’s members lobbied Trump against transgender service in the military, which he already prohibited in 2017. The ban took effect in 2019, around the time of Groundswell’s meeting, after the Supreme Court lifted lower court orders blocking it by a 5–4 vote. (Clarence Thomas did not recuse himself from the case; he has never recused from any case because of his wife’s lobbying activities.) The New York Times also reported that Ginni Thomas compiled lists of federal employees whom she deemed insufficiently loyal to the president. She sent her lists to Trump, urging him to fire the disloyal employees, though he seems to have largely ignored her. He has, however, stacked his administration with former Thomas clerks.

Throughout the 2020 campaign, Thomas remained active on Facebook, condemning Black Lives Matter, opposing COVID-19 shutdowns, and touting the “Walk Away” movement, which purports to spotlight Democrats who became Republicans under Trump. (At least two individuals featured in the “Walk Away” series, both Black, were actually models from royalty-free stock photos.) She also campaigned for Trump in person—and, according to the Intercept, spearheaded a dark-money operation to support the president. Cleta Mitchell, the Republican lawyer who participated in Trump’s shakedown of the Georgia secretary of state, led the project.

After Nov. 3, Thomas grew uncharacteristically quiet on Facebook; she did not share popular conspiracy theories about election fraud, perhaps because election challenges would inevitably come before her husband. She provided her clearest statement yet on Jan. 6, when she enthusiastically endorsed the D.C. rally designed to make Congress overturn the election result and give Trump a second term. There is no evidence that Thomas personally attended the rally, and her posts indicate that she watched the events on TV from another location.

Ginni Thomas’ activism on matters that come before her husband raises thorny ethical issues. Federal law requires justices to recuse themselves from any proceeding in which their “impartiality might reasonably be questioned.” It also compels justices to recuse if their spouse has “an interest that could be substantially affected by the outcome” of the case. In the coming months and years, Democrats will likely pressure Clarence Thomas to recuse himself from high-profile cases or to resign altogether. If Thomas steps down under Biden, progressives can restore a 5–4 divide on the Supreme Court, giving Chief Justice John Roberts control once again. Given Thomas’ staunch refusal to recuse thus far, though, there is little chance that he will take any steps to remediate his conflicts of interest, let alone retire during the presidency of a man he openly despises.

In all likelihood, Ginni Thomas will face no consequences for cheerleading a rally that sought to overturn an election, then laid siege to the Capitol in a failed insurrection. Her husband will ignore the controversy and continue to rule on cases that involve his wife’s lobbying efforts. We may never know how much influence a conspiracy theorist has on the highest court’s most conservative justice.