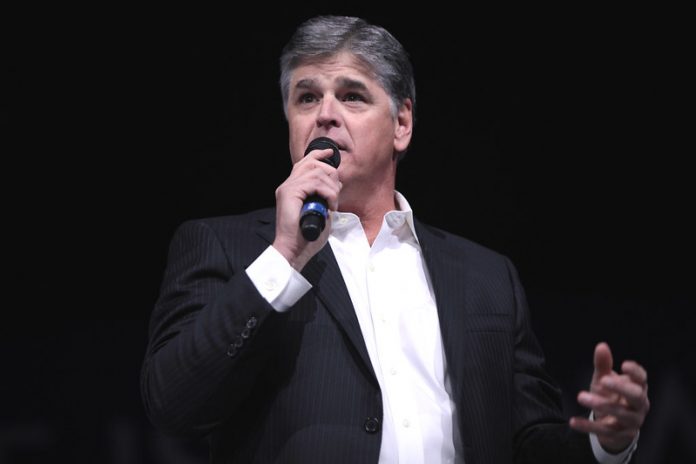 Throughout the ongoing coronavirus pandemic, President Donald Trump’s decisions and stances have seemingly been influenced by the unofficial advisers he treasures most: Fox News primetime hosts.

After downplaying for weeks the threat of the virus, just as many on Fox News did the same, the president began taking it seriously last month after Tucker Carlson personally confronted him before delivering an on-air monologue calling for action. Elsewhere, Fox stars have been the primary driving force behind Trump’s incessant promotion of an unproven anti-malarial drug as the miracle COVID-19 cure.

And in recent days, it seems, the president has been receiving his newest coronavirus intel briefing from Fox News. This time, they say, the pandemic is over and it’s time to move on.

Throughout Tuesday night’s primetime stretch, Carlson, Sean Hannity and Laura Ingraham were in lockstep in telegraphing to Trump a message that the pandemic’s threat has been overstated, death counts have been inflated, and the U.S. is already on the downside of the curve.

Carlson, who received mainstream plaudits for his “admirable” early coronavirus coverage, kicked off his show by declaring that the crisis “may have passed,” noting that health-care systems across the country haven’t come close to collapsing—“except in a handful of places.”

“Patients are not dying alone in the hallways of emergency rooms with physicians too overwhelmed to treat them,” he asserted. “That was the concern. It happens in other countries, it’s not happening here. Thank God for that.”

There have been numerous reports and testimonials from health-care workers expressing horror over the conditions of overcrowded hospitals and the stress it has placed on both medical staffers and patients. Much reporting has also been done on how many patients are dying alone and away from family members and friends from the disease.

But despite nearly 13,000 U.S. deaths and at least 400,000 confirmed cases, with portions of the country having yet to suffer the worst effects of the outbreak, Carlson called for a quick reversal of social-distancing restrictions in order to jumpstart the economy, citing downward revisions of coronavirus models as the key reason.

“Before we go ahead and alter our lives and our country forever, it is fair to ask about the numbers, their numbers, the ones we acted on the first time, that turned out to be completely wrong,” the Fox star fumed. “How did they screw that up so thoroughly? That is a fair question.”

Adjustments of expected death tolls in some models—which, weeks ago, showed as many as 240,000 American deaths—have largely occurred due to the widespread adoption of social-distancing guidelines and the assumption that school and business closures will stay in place through the summer. Even factoring all that in, the models still project roughly 80,000 deaths.

Nevertheless, over the past few days, Carlson has been pushing the president to ignore medical expertise and quickly move forward with economic activity.

“Is there a single person who sincerely expects the coronavirus itself will hurt more people in the end than the damage we’re causing in our response to it? Probably not,” he said on Monday night. “Mass unemployment is almost certain to cause far more harm, including physical harm, to the average family than this disease.”

Carlson has also railed against top infectious disease expert Dr. Anthony Fauci, who has urged Americans to embrace social distancing in order to flatten the curve. Calling it “bewildering” that the U.S. is allowing medical “experts” to make policy decisions, Carlson claimed last week that Fauci is proposing “national suicide” by pushing aggressive social distancing. “We should never let someone like that run this country,” he said.

Fox News senior analyst Brit Hume, who has recently been at the forefront of right-wing media’s questioning of coronavirus deaths, has also joined the chorus of Fox stars agitating against medical expertise. The official COVID-19 death count has been inflated, he declared Carlson on Tuesday evening.

“Dr. Birx said tonight during the briefing at the White House that all deaths from anyone who died with coronavirus are counted as if the person died from coronavirus,” Hume said. “Now, we all know that isn’t true.”

“And if everybody is being automatically classified, if they’re found to have COVID-19, as a COVID-19 death, we’re going to get a very large number of deaths that way and we’re probably not going to have an accurate count of what the real death total is,” he added.

Besides the fact that flu deaths—which Trump and FOX figures have constantly used as a comparison point to downplay the pandemic—are tracked the exact same way, and coronavirus disproportionately impacts people with pre-conditions, it is actually far more likely that the COVID-19 death count has been understated so far.

Laura Ingraham, however, may have been the most aggressive among her primetime colleagues in openly pushing Trump to view the pandemic threat as completely neutralized.

Claiming the experts were “wrong” with their modeling and that it caused undue panic for Americans, Ingraham echoed Carlson by railing against medical officials, claiming this pandemic should “make us less willing to rely on the same experts to help determine when and how we should reopen our economy.”

“We didn’t vote for doctors,” exclaimed Ingraham, who recently sat with the president to tout the unproven coronavirus cure hydroxychloroquine. “We voted for political leadership that sees the big picture. That means the whole picture of America.”

“At some point, the president is going to have to look at Drs. Fauci and Birx and say, we’re opening on May 1,” she wrote on Wednesday morning. “Give me your best guidance on protocols, but we cannot deny our people their basic freedoms any longer.”

“America must get back to work,” Ingraham blared in another tweet. “‘Experts’ were wrong on fatalities by a factor of 30 now want to dictate when we reopen.”

While Trump’s Fox News cabinet is declaring the crisis over, the network’s brass is still taking the pandemic seriously, implementing strict social-distancing policies for its employees. In a memo sent last week, Fox News CEO Suzanne Scott announced the company would distribute thermometers to all essential workers and suggested the use of face masks for anyone who had to come into one of Fox’s offices. Additionally, Scott said that Fox was targeting May 4 as a possible return date for employees currently telecommuting.

And as Fox News’ biggest stars tried to convince the president to ditch social distancing altogether, one of Trump’s own health officials rebuked the network’s faux-populist manipulation of the expert data and projections.

“Physical distancing is incredibly important—remember the projections,” Assistant Secretary for Health Brett Giroir said Wednesday on Fox & Friends. “I have seen people twist that like this was not going to be that bad after all and we didn’t need to do it. That’s a complete misinterpretation. The estimate of deaths going down is the result of the fact that we have listened to the president and vice president and task force.”

“I do want to emphasize the point, there is a light at the end of the tunnel, but don’t keep your foot—don’t take your foot off the gas,” Giroir continued. “Because we really need to continue these efforts because we could see another peak, a second peak, a third peak if people don’t do the physical distancing or they think it’s all over.

Daily Beast: Trump’s Fox News Cabinet Tells Him the Coronavirus Crisis Is Over