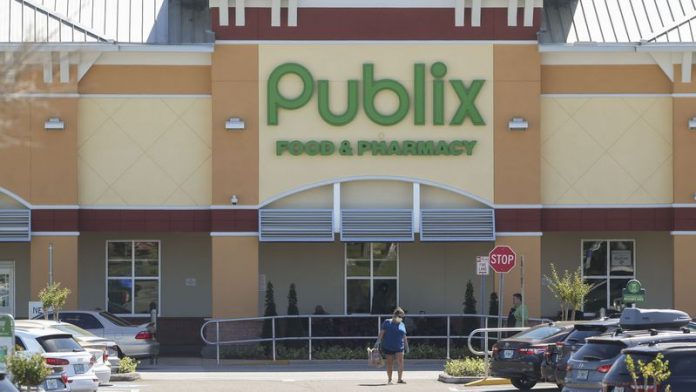 Florida’s governor is facing vaccine discrimination concerns after announcing that supermarket chain Publix will become Palm Beach County’s exclusive distributor of the COVID-19 vaccine, a decision that local leaders say will put some Black and rural communities at a dangerous disadvantage.

Wilson was one of three mayors in his area, located along Lake Okeechobee’s southeast border, to send a letter to Gov. Ron DeSantis’ (R) office expressing concern of his decision Tuesday to strip the county’s physicians, pharmacies, and hospitals of the ability to receive future vaccine doses in favor of the supermarket chain.

“When we first started there were people concerned about, really hesitant about taking the shots, skeptical about it,” Wilson said of his city’s residents, the majority of whom are Black. “We’ve been out there knocking on doors letting people know, trying to encourage them to take the vaccine… now they’re excited and willing to do this and now they’re hearing that they have to go 35-40 miles away.”

The mayors cited this incredible distance and residents’ lack of personal transportation as future vaccination inhibitors under DeSantis’ plan, which he’s called a “pilot project.”

“In more affluent communities, none of those distances would be a barrier to getting the vaccine; people would simply get in their vehicles and drive to the Publix nearest their homes,” the mayors of South Bay, Belle Glade, and Pahokee said in their letter. “This is simply unacceptable, and, quite frankly, unconscionable. Placing such a barrier on an already vulnerable, highly underserved population cannot be allowed to happen.”

Though Wilson’s office cited success vaccinating residents at the city’s local hospital, the local leaders suggested the governor consider partnering with other private entities, such as CVS or Walgreens, to allow for greater access. 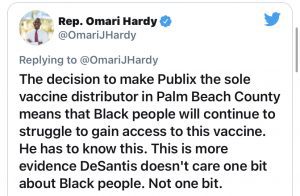 office has denied that there is any connection between the donations and the supermarket’s exclusive vaccine rights.

“I think it’s just a matter of what’s the most easy for folks,” DeSantis said at a press conference Tuesday of his selection of Publix for the entire county. “They have so many seniors that live near Publix. Ninety percent of their seniors live within a mile and a half of at least one Publix.”

The governor’s decision is “more evidence DeSantis doesn’t care one bit about Black people. Not one bit,” Hardy argued on Twitter. “There are entire communities that don’t have a Publix, communities like the Glades, which is majority Black, rural, and economically depressed.”

He said that he is feeling confident that a solution will be found with Palm Beach County’s leadership, with him citing a call he had earlier in the day with County Health Director Dr. Alina Alonso, who has publicly expressed similar concerns with the Publix vaccine pact.

In the meantime, Wilson said he hopes DeSantis “thinks outside of the box” and considers how his decision affects rural communities.