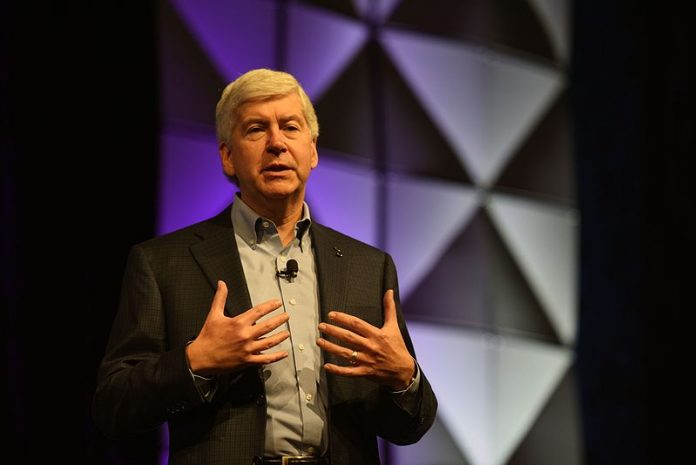 Former Gov. Rick Snyder appeared in a Flint court this morning and pleaded not guilty to two charges of willful neglect of duty — misdemeanor charges filed on the eve of a major announcement later today in the Flint water crisis criminal investigation.

Snyder, 62, wore a navy blazer, a light blue collared shirt without a necktie, and a gray face mask for the court appearance. He was seated next to his attorney, Brian Lennon, in a Genesee County jail booth as they appeared for the hearing via Zoom.

Snyder spoke sparingly during the hearing. His only words were “yes, your honor” in response to Odette’s question if he lives in the state. Snyder did not say which city or town.

During the arraignment before Genesee District Judge Christopher Odette, Attorney General Dana Nessel’s office sought to restrict Snyder’s travel during the case by surrendering his passport because Snyder is a “man of means” with international contacts.

But Odette only ordered Snyder not to leave the state without the court’s permission.

“I’m not going to have him surrender his passport on a misdemeanor charge,” Odette said.

Odette also set a personal recognizance bond of $10,000 on each charge for Snyder. The former governor walked out of the county sheriff’s office after the hearing but did not comment to waiting reporters and photographers.

Nessel filed two charges of willful neglect of duty against Snyder on Wednesday, a day before her office is set to announce new details in the Flint water crisis investigation.

Each charge Snyder faces is a misdemeanor punishable by up to a year in prison or a fine of up to $1,000.

Snyder is the first Michigan governor or former governor to be charged with a crime for alleged conduct while in office.

In 1975, former Democratic Gov. John Swainson was indicted for bribery while a member of the Michigan Supreme Court. Swainson, who was Michigan governor in 1961 and 1962, was later acquitted of the bribery charge but convicted of perjury. He died in 1994.

New charges in the Flint criminal case mark a dramatic escalation of the long-dormant prosecution. Critics had once chided criminal investigators for only bringing charges against lower-ranked local and state officials while bypassing Snyder. But some legal experts believe convicting a former governor for his conduct in the office could be a substantial courtroom challenge.

Snyder, a Republican who has been out of the office for two years, was governor when state-appointed managers in Flint switched the city’s water to the Flint River in 2014 as a cost-saving step while a pipeline was being built to Lake Huron. The water, however, was not treated to reduce corrosion — a disastrous decision affirmed by state regulators that caused lead to leach from old pipes and poison the distribution system used by nearly 100,000 residents.

The prosecution also widens Thursday to include more serious charges against one of Snyder’s former top aides as well as his former health department director.

Richard Baird, a top aide to former Gov. Rick Snyder, has been charged with four felonies – including extortion and obstruction of justice – as part of the Flint water crisis criminal investigation.

Genesee Circuit Judge Elizabeth Kelly entered pleas of not guilty to the charges during Baird’s arraignment Thursday. The basis for the charges was not discussed.

And just before Snyder appeared in court, Michigan’s former health director, Nick Lyon, pleaded not guilty to involuntary manslaughter charges in connection to the deaths of nine people who got Legionnaires’ disease during the Flint water crisis.

“We believe there is no evidence to support any criminal charges against Governor Snyder,” the former governor’s defense attorney Brian Lennon told The Associated Press on Wednesday night, adding that state prosecutors hadn’t provided him with any details.

Requests for comment by NBC News from Lennon weren’t immediately returned. The state attorney general’s office had no comment.

Attorney General Dana Nessel and prosecutors are expected to discuss the case during a press conference Thursday morning.

The decision by Snyder’s administration in 2014 to switch Flint from Detroit’s water system to the Flint River led to the disaster, as the untreated river water resulted in pipe corrosion and lead contamination.

Criminal charges were filed in 2017 against a number of state officials, including Lyon, over the Legionnaires’ disease outbreak at the same time as the contaminated water crisis. Lyon was accused of failing to inform the public for a year after he learned about the outbreak in 2015.

Prosecutors dropped charges against Lyon and seven other people in 2019.

Experts have said the city’s contaminated water led to the outbreak of Legionnaires’ disease, a severe form of pneumonia caused by bacteria that thrive in warm water.

Bryant Nolden, a member of the Genesee County Board of Commissioners who runs a historic recreation center in Flint, celebrated the news that those indicted would include Snyder.

“The buck stopped at Governor Snyder,” he said. “He was the one that put the people in place that actually did this. We have to see how this all plays out, but I’m very happy to hear that some folks are going to be held accountable at the highest level.”

Nolden said he and his neighbors in Flint were disappointed when earlier rounds of indictments stopped short of Snyder. “I was a little concerned that it wouldn’t go all the way up the ladder to him.”

Bringing Snyder to account, he said, won’t repair the damage done in Flint — including skyrocketing rates of children who need special education services — but it will improve morale among residents.

“The residents here are very resilient,” he said. “We’ve made it through, and we’re dealing with it, but I think that this will help in some small way, letting them know that justice will be served because these people will be held accountable for the wrongs that they did here in this community.”

Residents of Flint, a majority-Black city, have struggled for years to recover from the crisis as they relied for months on bottled water as their primary source of clean water and their property values suffered.

The state agreed to a $600 million settlement in August in a class-action lawsuit with Flint residents whose health was afflicted, establishing a fund from which residents can file for compensation.