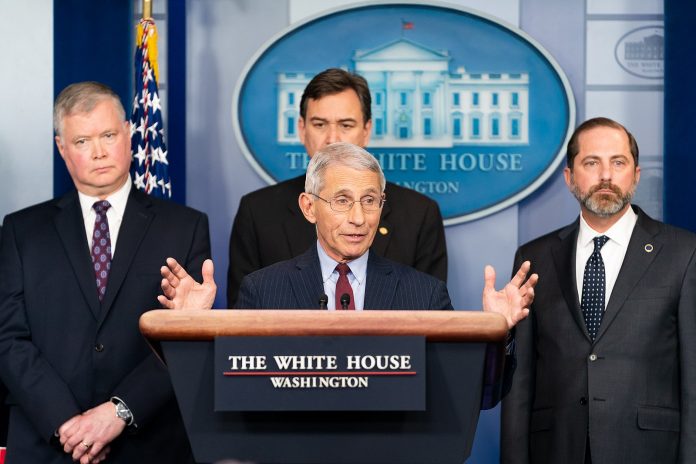 By now the soles of Dr. Anthony Fauci’s shoes have to be split into strips because he’s been forced to dance on a knife’s edge day after day. Fauci, who has been the director of the National Institute of Infectious Diseases since 1984, has consistently been the one person on Donald Trump’s coronavirus task force who is more interested in informing Americans about how they should deal with the threat from COVID-19 than in buffing Trump’s well-shined ego. Fauci seems to understand that America needs him to remain on stage and insert as many facts as possible into what is otherwise a combination campaign rally, medicine show, and disinformation engine. This means that he often has to deliver some critical information while keeping an eye toward Trump to see how closely his skin matches his tie.

In just the last two days, Trump has retweeted a call to #FireFauci for daring to tell the truth about the ineffectiveness of Trump’s actions when confronting the pandemic, and Fauci has been forced to secure a momentary peace by pretending that Trump really did pay attention to early warnings. But in a Tuesday interview, Fauci has told another truth that goes 180 degrees against everything Trump has been saying for weeks: America isn’t ready to reopen, and never will be unless there is improved testing.

In an interview with the Associated Press, Fauci explained that the United States has to have a system that identifies the real breadth of infection, allows case tracing to find those potentially exposed, and which can respond quickly to signs that the epidemic is accelerating. “We have to have something in place that is efficient and that we can rely on,” said Fauci, “and we’re not there yet.”

While Trump is busy creating a committee of sharks dedicated to the reopening of Amity’s beaches, Fauci made it clear that any effort to dial back social distancing regulations at this point is inviting a … is it possible to have a resurgence when the surge hasn’t even ended? “I’ll guarantee you, once you start pulling back there will be infections,” said Fauci.

As experts have said from the beginning—and experience in other nations has made clear—before the general population can begin to return to anything close to normal operations, it’s necessary to identify those who may be infected and isolate them until they’ve recovered. A few days of reduced cases and deaths is far from enough to signal that everything is good to go, especially when the current testing regime is far from adequate. In fact, apparent improvements at this point may be as much about a lack of available tests as they are genuine improvements.

Even areas like China and South Korea that have begun to relax some of the rules put in place at the height of the outbreak have done so weeks later than what Trump is proposing. Those nations now easing back from strict lockdowns are doing so with better testing, better tracking, and a better-planned response than anything Trump is proposing.

As if being firm about the need to conduct systematic testing and tracing before relaxing social distancing isn’t enough to generate fresh hashtags among Trump’s reality-averse fans, Fauci also had a few complaints about being forced to act as a prop for more than two hours while Trump ran campaign ads and pushed unapproved drugs. “If I had been able to just make a few comments and then go to work, that would have really been much better,” said Fauci. “It isn’t the idea of being there and answering questions, which I really think is important for the American public. It’s the amount of time.”

It’s likely only a matter of time before Trump decides that having the backing of the one person America trusts on this topic isn’t really necessary. After all, he can always get Jared to talk.

Daily Kos: Fauci confirms that the U.S. doesn’t have enough testing to think about reopening