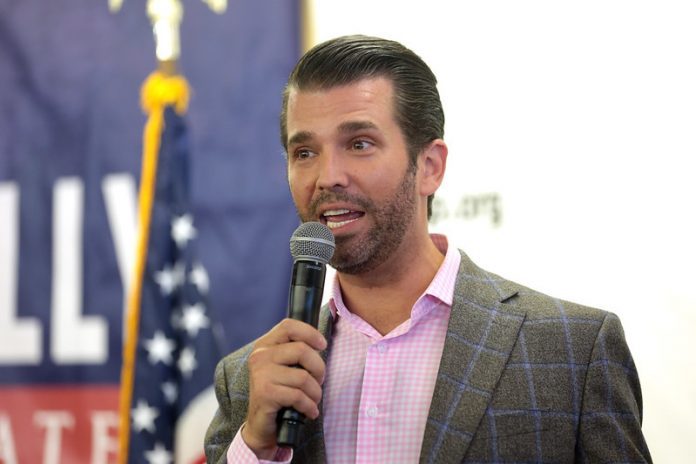 Donald Trump Jr has been suspended by Twitter for posting “misleading and potentially harmful information” about coronavirus.

The president also shared the same tweet. On his account, the post no longer appears, and has been replaced with a message indicating that it is “no longer available”, but he still appears to be able to tweet.

Other tweets including the video would be taken down because they are “in violation of our Covid-19 misinformation policy”, a spokesperson said, pointing to the public policy documents on its website that outline its rules around the disease.

News of the suspension of Donald Trump Jr, the president’s oldest son, was first shared by his ally and Republican strategist Andrew Surabian.

Surabian claimed that the suspension was a demonstration that Twitter is a “threat to free expression” and that it was “continuing to engage in open election interference”, but posted a screenshot that made clear that the tweet in question had been banned over accusations of misinformation.

Trump Jr will not be able to tweet for the next 12 hours or use other features such as following other users or liking their posts, according to the screenshot shared by Surabian. The post in question has also been removed from his page.

The tweet in question falsely promoted the drug hydroxychloroquine as a cure for Covid-19. It included a video that showed people claiming to be doctors, who falsely argued that “you don’t need masks” and that studies showing that the drug may not be effective are “fake science”.

Facebook, Twitter, and YouTube have been removing the video when it has been posted, in line with policies intended to stop the spread of misinformation about coronavirus.

That included Twitter taking the video down from the president’s account after he had shared it in multiple different ways over Monday evening.

Twitter’s removal of the tweets is the latest fight between the social media company and the president. It followed his accusations that the site’s trending topics are “Really ridiculous, illegal, and, of course, very unfair”.