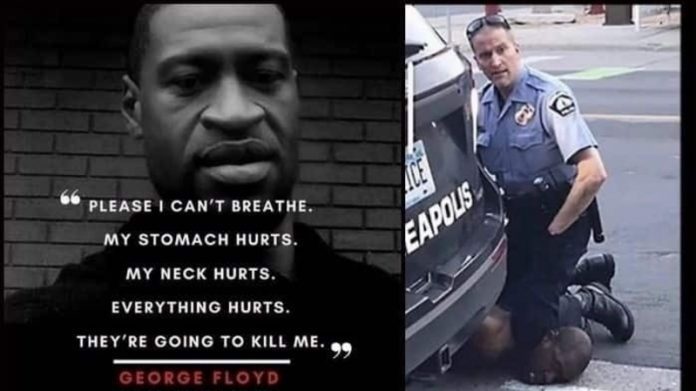 More than 10 months after the death of George Floyd in Minneapolis, opening statements begin Monday in the murder trial of former police officer Derek Chauvin.

And the city, in a unique juxtaposition, is bracing for riots not seen since last summer as council members again seek to defund police.

A video recorded by a bystander showing the White officer with his knee pressed to the back of the Black man’s neck for nearly nine minutes, ignoring his pleas that he couldn’t breathe, will likely serve as a focal point for prosecutors.

The defense is expected to argue that Floyd was not killed on Memorial Day by Chauvin’s knee – but rather by the drugs he ingested while resisting arrest and underlying health conditions, including high blood pressure and heart disease.

As jurors consider arguments from both sides high above on the 18th floor of the Hennepin County Government Center, the intersection where that footage was captured at E. 38th Street and Chicago Avenue has devolved into an autonomous zone riddled with gun violence and gang activity.

Armed individuals have sought to keep both law enforcement and journalists out of the barricaded George Floyd Square, as local residents and business owners have appealed for help.

Meanwhile, city and county officials have invested at least $1 million in fortifying the courthouse, police precincts and city hall after demonstrators set Minneapolis ablaze last summer. After several failed attempts to defund police since June, the Minneapolis City Council is advancing a new proposal asking voters to decide in November how to reform public safety as crime rates spike.

Here are five things to know about the trial, viewed by many as a defining moment on issues of racial justice and policing in America.

Chauvin was a 19-year veteran of the Minneapolis police department.

The incident behind the charges was filmed and viewed by millions around the world, sparking a summer of protests across the nation.

In the video recorded in front of Cup Foods, Floyd could be heard pleading for his mother and saying he couldn’t breathe as Chauvin pressed his knee into the back of his neck.

Onlookers repeatedly shouted at Chauvin to get off, asked him to check for a pulse, and warned that Floyd no longer seemed to be breathing.

Three other officers involved – Thomas Lane, J.A. Kueng, and Tou Thao – were each charged with two counts of aiding and abetting and second-degree murder. They are expected to stand trial together in August.

Keung and Lane responded to a 911 call around 8:08 p.m. about a man who allegedly bought merchandise from a corner market with a counterfeit $20 bill, court papers show.

Floyd was in the driver’s seat of a vehicle parked around the corner when the officers arrived.

Body camera footage shows Lane pointing his gun at the open driver’s side window, and ordering Floyd to put his hands on the steering wheel before holstering his gun.

Lane then orders Floyd out of the vehicle and ends up pulling him out of the car. The officer handcuffs Floyd, who “actively resisted,” according to a criminal complaint filed in the case.

Once handcuffed, Floyd “became compliant” and walked with Lane to the sidewalk and sat on the ground, the complaint says. In a conversation that lasted just under two minutes, Lane asked Floyd for his name and identification, asked Floyd if he was “on anything” and explained that he was arresting Floyd for allegedly passing counterfeit currency.

Kueng and Lane stood Floyd up and attempted to walk him to their squad car, but, at 8:14 p.m., Floyd stiffened, fell to the ground and told the officers he was claustrophobic. Chauvin and Thao then arrived in a separate squad car.

Floyd was over 6 feet tall and weighed more than 200 pounds.

The officers made several attempts to get him in the backseat of the squad car from the driver’s side. Floyd struggled with the officers, saying he was not going in the car. While standing outside, Floyd began to say more than once that he could not breathe, the complaint says.

Chauvin went to the passenger side and tried to get Floyd into the car from that side. Lane and Kueng assisted.

When Floyd went to the ground face-down while still handcuffed. Kueng held Floyd’s back and Lane held his legs. Chauvin placed his left knee in the area of Floyd’s head and neck, and Floyd said, “I can’t breathe” multiple times. He repeatedly also said “Mama” and “please,” according to the complaint.

Chauvin, Keung, and Lane all stayed in their positions. “Should we roll him on his side?” Lane asked, and Chauvin responded, “No, staying put where we got him.”

Body camera footage appears to show Floyd ceasing to breathe or speak, and Kueng checks his pulse and says, “I couldn’t find one.”

An ambulance arrives and medics place Floyd on a gurney and take him to Hennepin County Medical Center, where he was pronounced dead.

Ellison made the unprecedented move to take over the case from the Hennepin County Attorney’s Office, which secured the 2019 third-degree murder and second-degree manslaughter conviction of Black Minneapolis officer Mohamed Noor, a Somali-American, in the shooting death of Justine Ruszczyk Damond, a White Australian woman.

The state Supreme Court recently agreed to hear Noor’s appeal of his third-degree murder conviction, which could have implications for the Chauvin case, the Minneapolis Star Tribune reported. Hennepin County Judge Peter Cahill, who previously threw out the third-degree murder charge against Chauvin, was bound by law to reinstate it two weeks ago.

The autopsy conducted by the Hennepin County Medical Examiner determined that Floyd’s cause of death was “cardiopulmonary arrest complicating law enforcement subdual, restraint, and neck compression.”

The manner of death was listed as “homicide.” Other significant conditions listed were “Arteriosclerotic and hypertensive heart disease; fentanyl intoxication; recent methamphetamine use.”

Floyd’s family later hired private doctors to conduct an independent autopsy, which listed the cause of death as “mechanical asphyxia” and the manner of death as “homicide.”

The jury that will decide Chauvin’s fate is the panel of 15 individuals, including nine people who are White and six who are Black or multiracial, according to the Hennepin County District Court. If the court follows standard practice and the alternates are the last three chosen, the 12 who deliberate would be evenly split between White people and people of color, according to The Associated Press.

When jury selection was completed, Floyd family attorney Ben Crump — who negotiated a $27 million civil settlement with the city — issued a statement that made no comment on its racial makeup, but highlighted the polarizing issue of race in Floyd’s death.

“This is not a hard case,” Crump said. “… If George Floyd had been White, the facts would be undisputed and justice would be swift. We expect the same for George.”

Attorneys on both sides used questions about Black Lives Matter and Blue Lives Matter to probe deeper attitudes on race and policing. Prospective jurors were also asked whether the protests and violence following Floyd’s death had a positive or negative effect on the community and whether they supported defunding the Minneapolis police department.

Some people in the juror pool were strikingly direct about how the color of their skin affected their view of Floyd’s death.

A Black man in his 30s who immigrated to America more than 14 years ago said he talked with his wife about the case. “We talked about how it could have been me, or anyone else,” he said.

Another Black man in his 30s, asked about the extent of discrimination in America, said it goes “well beyond what the media can even report.” He added: “Black lives just want to be treated as equals and not killed or treated in an aggressive manner simply because they are Black.”

Both men are on the jury.