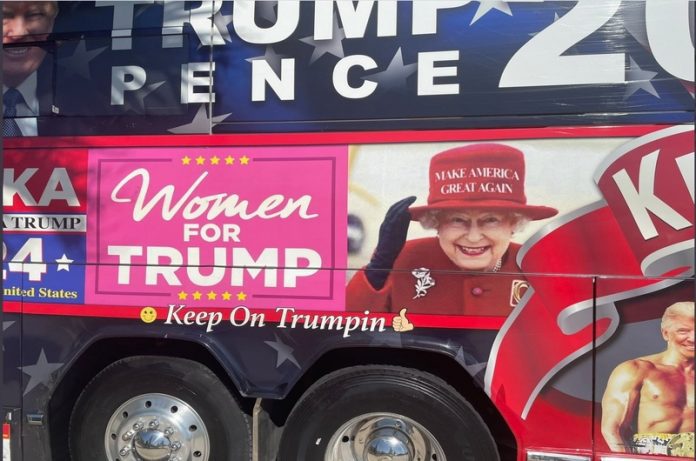 Buckingham Palace has made a formal request to have a doctored image of Queen Elizabeth II wearing a “Make America Great Again” hat and a QAnon brooch removed from a “Trump Train” bus that was seen at a rally held by Reps. Matt Gaetz and Marjorie Taylor Greene in Florida last week.

A Palace spokesperson spoke with BuzzFeed News telling them that they were aware of the fact that the Queen’s image was being used, saying “representations asking for [the photo’s] removal have been made.”

The bus is owned and operated by a Trump supporter named Buddy Hall. According to its GoFundMe page, the Trump Train was created as an “unofficial campaign tour bus to support the 2020 reelection of President Trump.”

Despite not being officially affiliated with any political candidate, the bus was a constant fixture at Trump campaign events during the 2020 election cycle. An image posted to the official Trump Train Facebook page shows Donald Trump Jr. and his girlfriend, Kimberly Guilfoyle, posing in front of the bus with Hall in July.

The latest iteration of the bus, as seen in Florida last week, boosts an as-yet-unannounced 2024 campaign for Trump and former vice president Mike Pence. Trump has spent the months since his election loss lying about the results, insisting without evidence that the election had been stolen and raging at any Republicans who don’t go along, including Pence. Gaetz and Greene, who led the Florida rally, are both close Trump allies — at the rally, both Republicans declared Trump the reigning leader of their party.

On May 1, Hall wrote that the bus’s current display would be removed in two weeks “taking TRAITOR PENCE OFF replacing with DESANTIS, Candace Owens, Don Junior, Laura Trump, General Flynn, Rand Paul, and many others.”