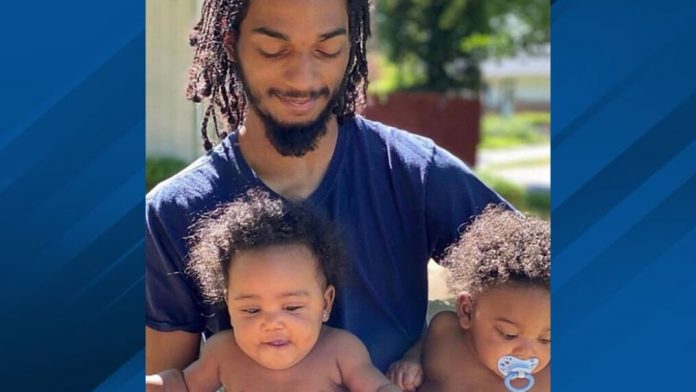 The mother of a young Black man shot and killed by a police officer in Ohio says his autopsy results show he was struck six times from behind with a “high-powered rifle” more than two months ago.

Casey Goodson Jr.‘s mother revealed the autopsy results on Wednesday, February 10, 2021, after keeping them concealed since the procedure on Jan. 11, more than a month after the shooting in Columbus. Tamala Payne‘s 23-year-old son was shot five times in his back and once in his rear end as he entered his home on Dec. 4, she said.

The Columbus Police Officer who shot him — Jason Meade — apparently and inexplicably mistook the sandwiches Goodson was holding in his hand for a gun. Meade remains gainfully employed by the embattled Columbus Police Department also involved in a separate recent shooting of another unarmed Black man.

Payne’s lawyer suggested she decided to go public with the autopsy results now because her son’s case hasn’t progressed as she expected it to.

“The family didn’t want to interfere with the investigation at all, but given the amount of time that’s passed, we felt it was important to tell more of the story of Casey,” Payne’s attorney Sean Walton told the Columbus Dispatch.

The area’s federal law enforcement agency has maintained that Meade gave Goodson a command to drop the gun he was accused of waving at an officer as he drove home returning from a trip to the dentist.

Police say they recovered a gun, but Goodson’s family says he is licensed to carry one and doubted he would just brandish one at law enforcement. Instead, they say, he was carrying a bag of sandwiches from Subway when he was shot in the back and fell into his home with his keys still dangling in the door’s lock.

The Columbus chapter of the NAACP said it had four questions that have gone unanswered about the shooting, including why the U.S. Marshal 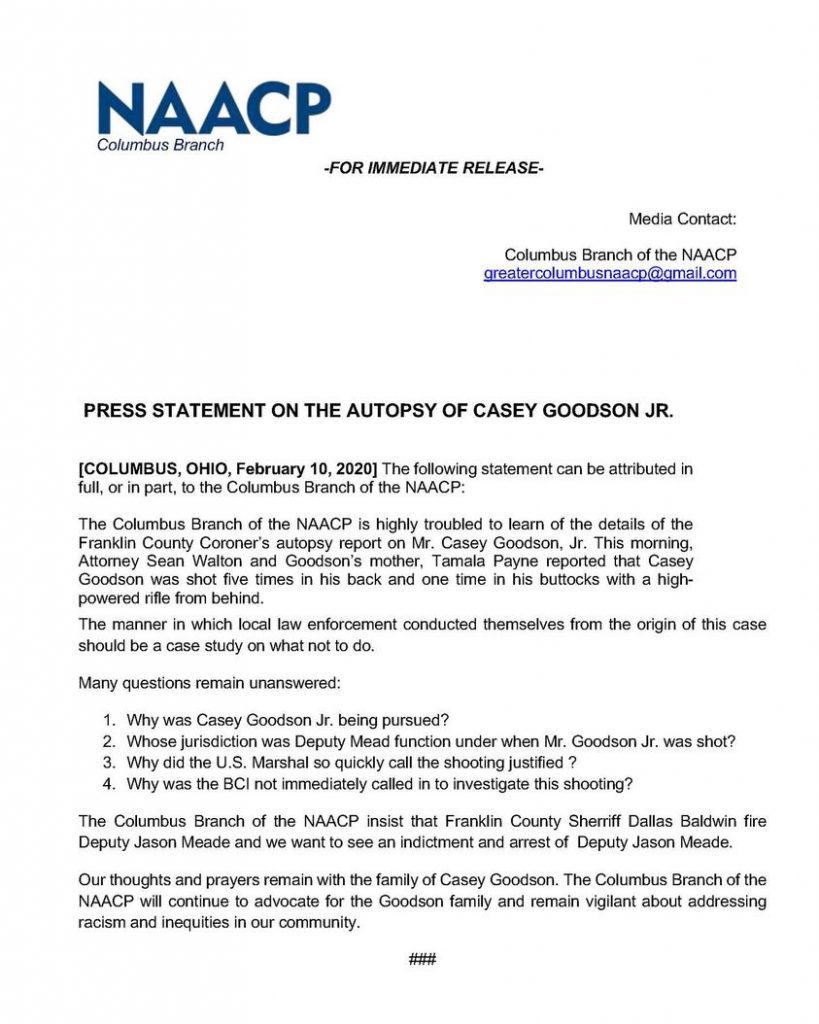 for the Southern District of Ohio was so quick to justify it. The group called for Meade’s immediate firing, indictment, and arrest.

Franklin County Sheriff Dallas Baldwin downplayed Goodson being shot in the back, insisting that “criminal investigations over the years have shown that the physical location of gunshot wounds alone don’t always tell the entire story of what happened.”

Franklin County Prosecutor Gary Tyack said he is “awaiting a final autopsy report before making any decisions on the case,” the Dispatch reported. It was unclear why Tyack is not recognizing the results from the autopsy that Goodman’s mother, lawyer, and the NAACP were citing since the shooting took place on Dec. 4. A preliminary autopsy listed the cause of death as a homicide and said the killing was the result of “multiple gunshot wounds to the torso.”

Ohio Attorney General Dave Yost declined to take up the case because he said Columbus police took three days to bring the case to their attention. Columbus police also waited two days before they officially identified Goodson as the victim.

Payne previously claimed the police have changed stories multiple times, prompting suspicion of some kind of a coverup.

Payne said she has been left with more questions than answers since law enforcement hasn’t been fully forthcoming or transparent.

“While police claim that Casey drove by, waving a gun, and was confronted by the deputy after exiting his vehicle, that narrative leaves out key details that raise cause for extreme concern,” a press release by Walton + Brown, LLP, the law firm representing his family along with Friedman & Gilbert, said in part.

Payne took issue with that narrative. She called Meade a “coward” who “does not have enough guts to answer the questions as to why my son’s life was taken.”

She added: “Casey would never ride by waving his gun at anybody, let alone a police officer.”

Local police offered a slightly different account, saying Meade, who was working with the U.S. Marshals Service Fugitive Task Force in an unrelated case, saw “a man with a gun” while he was looking for other suspects.

“They recanted that story because that was so far-fetched,” Payne said of the initial allegations. “Because if he rolled by waving a gun, how was my son ever, ever, ever allowed to even exit the vehicle and walk across two yards into a back gate and get killed as he was going into his home?”

Goodson’s shooting shares similarities with that of Andre Hill, a 47-year-old unarmed Black man who was shot within seconds of a Columbus police officer seeing him early on the morning of Dec. 22.

However, there are two key differences: 1) unlike Meade, the officer who shot Hill — Adam Coy — was swiftly fired and indicted last week for murder, felonious assault and dereliction of duty for failure to inform his fellow officer that he felt threatened during the fateful encounter; and 2) there is bodycam footage of Hill’s shooting, unlike with Goodson’s killing.

There has been a growing trend in recent years with white police officers who shoot Black suspects in the back, whether fatally or not, not being held accountable for their preventable actions against people who did not pose immediate threats. 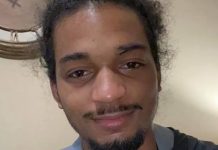 Two Special Prosecutors Have Been Appointed In The Fatal Police Shooting Of Casey Goodson Jr.