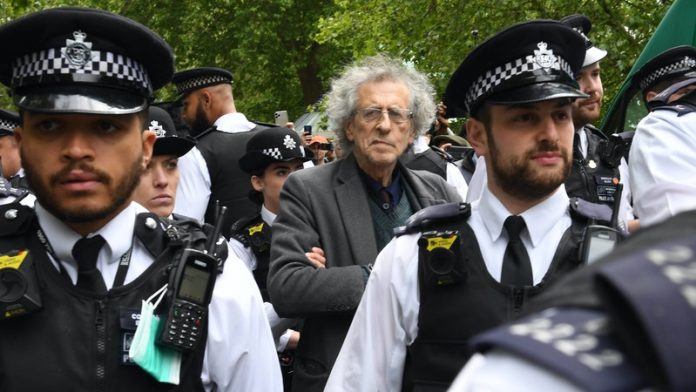 Piers Corbyn, the brother of the former UK Labour Party leader, has been arrested after allegedly urging the public to burn MPs’ offices. London police have confirmed that a man in his 70s remains in custody.

The prominent anti-vaccination figure, Piers Corbyn — the brother of former Labour Party leader Jeremy Corbyn — has been arrested after allegedly urging members of the public to burn down MPs’ offices, British media reported on Sunday. 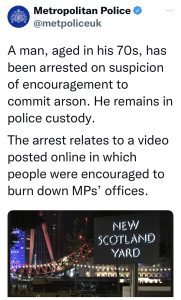 London Metropolitan Police confirmed on Twitter that a man in his 70s had been arrested “on suspicion of encouragement to commit arson.”

Corbyn’s comments condemned
A video circulating on social media shows Piers Corbyn addressing a group of supporters. In the video, he lashes out at politicians who voted in favor of COVID-19 restrictions.

ITV investigative journalist Mark Williams-Thomas was among those who shared the video on Twitter.

Corbyn can be heard saying: “We’ve got to get a bit more physical… We’ve got to hammer to death those scum, those scum who have decided to go ahead with introducing new fascism.”

Toward the end of the video Corbyn then said: “If your MP is one of them, go to their offices, and, well, I’d recommend burning them down.”

In other pictures, he can be seen wearing a shirt that read: “Resist! Defy! Do not comply!”

Home Secretary Priti Patel labeled the video “sickening” and urged police to take the “strongest possible action against him,” in a post on Twitter.

Corbyn’s alleged incitement to arson came just weeks after British politician David Amess was murdered while holding a regular meeting with his constituents in Leigh-on-Sea in October.

UK reintroduces COVID restrictions
On Tuesday, December 14, 2021, British lawmakers voted to approve restrictions to curb the spread of the omicron variant. The new rules include wearing of masks in public places and presenting COVID-19 vaccine passes or negative tests to enter certain venues.

Prime Minister Boris Johnson faced a rebellion in the vote, with more than 100 of his own lawmakers voting against his government’s measures.

On Sunday, Health Minister Sajid Javid did not rule out the possibility of restrictions being reinstated before Christmas, as the country battles a surge in omicron cases.