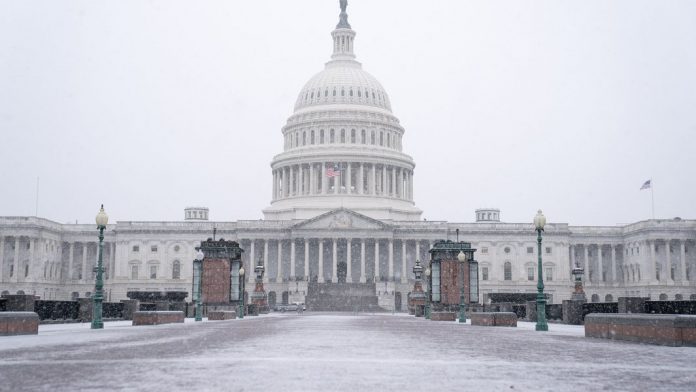 The 117th Congress will officially be sworn in on Sunday, bringing an influx of new lawmakers to Capitol Hill in the midst of the ongoing pandemic.

The Constitution calls for Congress to convene on January 3 at noon ET — the reason for the rare Sunday session. Newly elected and returning members will take the oath of office and the full House of Representatives will vote to elect a new Speaker. Nancy Pelosi, who has served as House speaker in the 116th Congress, is on track to remain in the role.

House Democrats kept control of the House in the November elections, but will now have a narrower majority after suffering a string of losses, despite projections that they would win more seats. House Republicans, meanwhile, outperformed expectations and are now poised to add a significant number of GOP women to their ranks in the new Congress.

In the Senate, the balance of power still has yet to be decided with all eyes on a pair of Senate runoff elections taking place in Georgia on January 5 that will determine which party controls the chamber.

The incoming class of freshmen includes high-profile Democrats and Republicans who have already gained national attention even before setting foot in Congress.

In the House, a slate of progressive Democrats who took down incumbents in primary challenges will be part of the new Congress, including Cori Bush of Missouri, who ousted congressman Lacy Clay in a major upset, and Jamaal Bowman of New York, who defeated the chairman of the House Foreign Affairs Committee Eliot Engel.

Other incoming members who already have a national profile include Republicans Marjorie Taylor Greene of Georgia, who became widely known for a track record of incendiary rhetoric and ties to the baseless QAnon conspiracy theory, and Ronny Jackson of Texas, President Donald
Trump’s former chief physician.

In the Senate, former Colorado Governor John Hickenlooper will serve as a new Democratic senator from Colorado and former Auburn University football coach Tommy Tuberville will become a new Republican senator from Alabama.

Alex Padilla will be another new senator in the new Congress after California Gov. Gavin Newsom appointed him to fill Vice President-elect Kamala Harris’ Senate seat. Harris and President-elect Joe Biden will be sworn in on January 20 during the presidential inauguration.

Mark Kelly, a retired Navy captain and NASA astronaut, a new Democratic senator from Arizona, was sworn in during the month of December after winning a special election.

The first day of the new Congress will look a bit different this year with safety precautions in place to respond to the coronavirus pandemic.

The number of senators sworn in at a time will be smaller to minimize crowding and senators are expected to take their oaths of office in groups of two to allow for social distancing.

Representatives will also be sworn in by groups, though the size will be far larger given how many more House members there are, with members-elect to be sworn in first.

Newly elected lawmakers often bring multiple family members to witness their swearing-in and be part of photos commemorating the occasion. This year, though, members-elect will be permitted to have only one family member in the House gallery to watch the proceedings.

After the vote to elect a House speaker takes place, the new Speaker will administer the oath to members.