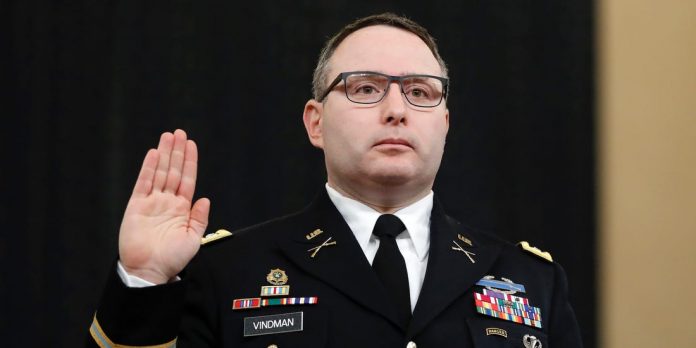 On Wednesday, July 8, 2020, CNN reported Lt. Col. Alexander Vindman, a key witness in President Donald Trump’s impeachment inquiry, is retiring from the US Army after more than 21 years of military service because he determined that his future in the armed forces “will forever be limited” due to political retaliation by the President and his allies, his lawyer told CNN Wednesday.

Vindman has endured a “campaign of bullying, intimidation, and retaliation” spearheaded by the President following his testimony in the impeachment inquiry last year, according to his attorney, Amb. David Pressman.

News of Vindman’s retirement marks the culmination of a months-long saga dating back to his public testimony in November.

Trump fired Vindman as the top Ukraine expert on the National Security Council in February and also ousted his twin brother who also played a key role in impeachment proceedings while serving at the White House as an NSC lawyer.

In recent weeks, the controversy has centered around allegations that the White House was attempting to block Vindman’s upcoming military promotion to the rank of colonel.

“The President of the United States attempted to force LTC Vindman to choose: Between adhering to the law or pleasing a President. Between honoring his oath or protecting his career. Between protecting his promotion or the promotion of his fellow soldiers,” Pressman said in a statement to CNN.

“These are choices that no one in the United States should confront, especially one who has dedicated his life to serving it,” he added, noting that Vindman “did what the law compelled him to do; and for that, he was bullied by the President and his proxies.”

Top Pentagon leaders, including Secretary of Defense Mark Esper, have insisted that Vindman is not being targeted for political reasons, but a source familiar with his decision said military officials have communicated to Vindman that the White House has sought to become involved in the promotion process.

In response, Vindman was told that there have been discussions within the Department of Defense about sending his name forward on a “list of one” or holding his name back until after the election to avoid impacting the promotions of other service members, the source said.

It is “absurd and frightening” for the White House to be involved in promotions at this level, the source added.

Ultimately, Vindman decided to retire from the military rather than attending the National War College, which was his next planned assignment, after speaking with senior Army officials who made clear that there were forces working against his advancement within the military.

Specifically, Vindman was told by senior Army officials that he would no longer be deployable in his area of expertise, which includes Ukraine, the source familiar with the situation told CNN.

He was also told by senior officers he would need a “rehabilitative assignment” even if he had opted to attend the National War College, an option he had been considering before Wednesday’s announcement, the source added.

In one case, a senior officer quipped about sending him to “man a radar station in Alaska,” the source said.

Raw Story: Alexander Vindman to retire from the Military