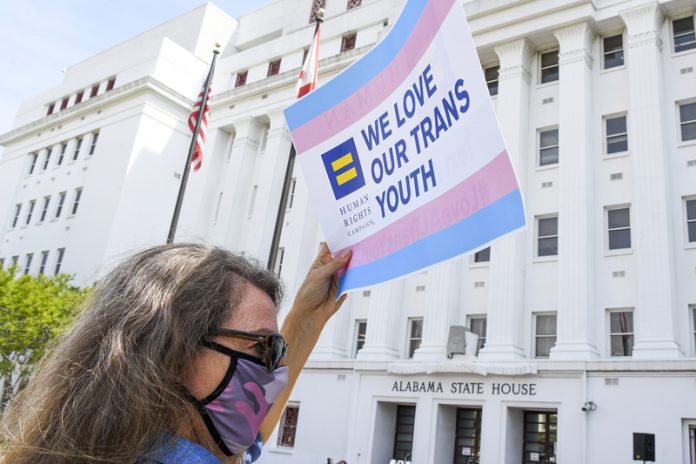 An Alabama law that makes it a felony to provide gender-affirming medical treatment to transgender youth went into effect on Sunday while a federal judge weighs whether to grant a motion to put a temporary hold on it.

The legislation makes it a crime punishable by up to 10 years in prison to provide puberty blockers, hormones, and medical procedures to transgender youth under 19.

Governor Kay Ivey had signed the bill on April 8. A similar but not as far-reaching law in Arkansas was blocked by the courts last year before it could go into effect.

After a two-day hearing concluded on Friday, U.S. District Judge Liles Burke gave no indication on when he will rule on the motion seeking to temporarily halt enforcement of the ban while a lawsuit is pending, according to local media reports.

The lawsuit, brought by organizations including the Human Rights Campaign and GLBTQ Legal Advocates & Defenders, argues the ban would cause “immediate and irreparable” harm to the plaintiffs and that the measure violates several of their constitutional rights.

The groups filed the lawsuit on behalf of the parents of four Alabama transgender youth, two physicians, and a minister. The U.S. Department of Justice has joined the case, saying the Alabama law “violated the equal protection clause” of the U.S. Constitution’s Fourteenth Amendment.

Gender-affirming surgery for people under 18 is extremely rare and would take place only after years of treatment in cases where the patient’s wishes are unwavering, according to medical experts.

Transgender rights have emerged as a wedge issue in the culture wars ahead of the November midterm congressional elections. Republican lawmakers have introduced hundreds of bills across state legislatures, the majority of them directed at trans youth.

Many Republicans and conservative activists promote the laws as safeguards for children and parental rights. Opponents, including Democrats and LGBTQ organizations, say the legislation is harmful, unnecessary, and would have dire consequences on an already vulnerable population.

According to a recent survey by the Trevor Project, a non-profit focused on suicide prevention among LGBTQ youth, 93 percent of transgender and nonbinary youth said they have worried about trans people “being denied access to gender-affirming medical care due to state or local laws.”