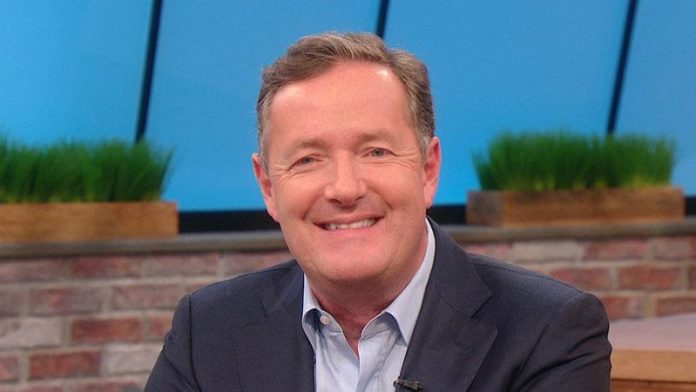 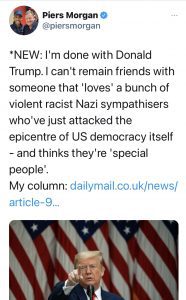 He wrote in his Daily Mail column:

“President Trump must be removed from office.

As soon as possible.

Either through new emergency articles of impeachment, which would have the additional benefit of barring him ever from running for the presidency again.

Or, my preferred option, through the 25th Amendment on the grounds of his obvious mental instability.

There can be no other appropriate response to the utterly horrific scenes we all witnessed at Capitol Hill yesterday.

And surely, he cannot be allowed to stay in office for another two weeks until Joe Biden’s inauguration because who the hell knows what he will do before then?

We’re now in an unprecedented situation where the President of the United States has been banned from using Twitter and Facebook because he can’t be trusted not to incite violence, yet he still has the power to start a nuclear war that could end civilization.

It’s hard to escape the belief that if the mob had been mostly black or Muslim, they would have been treated much more aggressively. I even saw one police officer pose for a selfie with a rioter.

We were watching an attempted coup in real-time, perpetrated by violent, racist extremists in the name of Donald Trump. They were exemplified by what I finally concluded was the most hideous image of all – a rioter arrogantly brandishing a confederate flag inside the Capitol, somewhere it had never been flown before, not even during the Civil War.

Four people died in the mayhem including a female rioter who burst through a window into the Capitol building and was shot by a police officer. She was an ardent, blindly obsessed Trumper who genuinely believed him when he said corrupt liberals had stolen the election – and it cost her her life. All the people who died were Americans.

n the past year, he has morphed into a monster that I no longer recognize as someone I considered to be a friend and thought I knew.

His dreadful leadership during the coronavirus pandemic and George Floyd protests was bad enough and laid bare his inherent narcissism, shockingly incompetent crisis management, and woeful inability to offer empathy or comfort to grieving and suffering Americans.

But his pathetic antics in the past few weeks since losing the election in November have been utterly contemptible.

I wrote on Monday that he was now acting like a mafia mob boss after a leaked tape emerged of him threatening Georgia officials unless they illegally fixed the election result in his favor.

And I urged other senior Republicans to stand up and stop him before it was too late.

Instead, a load of shameful GOP charlatans led by Senator Ted Cruz stood up to support Trump’s outrageous campaign to overturn a fair and democratic result without a shred of evidence to support his insistence of widespread voter fraud.

And now we’ve seen the direct result of Trump’s refusal to accept defeat and repeated entirely false claims that the election was ‘stolen’ from him: anarchy and insurrection from a crazed mob whipped by their president to storm the Senate and stop democracy being conducted.

Four people died in the mayhem including a female rioter who burst through a window into the Capitol building and was shot by a police officer.

She was an ardent, blindly obsessed Trumper who genuinely believed him when he said corrupt liberals had stolen the election – and it cost her her life.

All the people who died were Americans.

This is where Trump has taken his supporters – into an insane abyss of violent delusion where facts don’t matter.

And in doing so, he has destroyed everything he spent four years trying to achieve.

It doesn’t matter now that he got three conservatives onto the Supreme Court, or that he took out two of the world’s worst terror leaders, or that he got the economy roaring before the pandemic hit, or that he tried to end rather than start wars in a rare departure for a Republican president.

None of it matters anymore.

His diabolical reaction to losing the general election has now cost the Republicans control of the Senate because the Democrats flipped both seats in the Georgia re-runs.

How did that happen?

One theory is that many Georgian republicans refused to vote because they believed Trump when he said the system was rigged.

With his catastrophic act of self-harm, Trump has now blown up Trumpism as a political force, despite winning over 70 million votes in the election. There can be no way back now for him or his family. The Trumps are done as any kind of serious force in US politics.

And all because Donald’s stupendous ego couldn’t accept losing and sent him nuts, which in turn sent his supporters nuts.

I honestly couldn’t believe what I was watching as the rioters – or ‘domestic terrorists’ as many are calling them – broke through the flimsy police cordon and raced into the Capitol building.

There must be a full investigation into how on earth they were able to do that, why the National Guard wasn’t called in much sooner, and frankly why the rioters were treated mostly with kid gloves.

It’s hard to escape the belief that if the mob had been mostly black or Muslim, they would have been treated much more aggressively.

I even saw one police officer pose for a selfie with a rioter.

Once inside, the thugs desecrated the place.

I’ve walked inside those hallowed walls of the US Congress and they’re a magical monument to the very best of America.

Last night they became a nightmare monument to the very worst kind of America.

It’s hard to know which was the worst image.

There was a bearded rioter wearing a T-shirt saying ‘CAMP AUSCHWITZ’ above a skull and crossbones, with the phrase ‘work brings freedom’ printed below. This is a translation of ‘Arbeit Macht Frei,’ the words that appeared above the entrance of the Auschwitz concentration camp where more than a million Jews were murdered by Nazis during the WW2 Holocaust.

That made me shudder in horror.

As did the sight of white supremacists flashing the white power hand signal as they marched inside.

And seeing the menacing threat ‘murder the media’ daubed on a Capitol building door, and footage showing TV camera cables turned into nooses – making it clear the rioters agreed with Trump’s offensive and dangerous claim that the media is ‘the enemy of the people.’

Seeing armed cops barricading the door to the Senate chamber was horribly surreal, as was seeing Senators hiding on the floor, and rioters later lounging in the Speaker’s chair and roaming and looting offices including that of Nancy Pelosi.

We were watching an attempted coup in real time, perpetrated by violent, racist extremists in the name of Donald Trump.

They were exemplified by what I finally concluded was the most hideous image of all – a rioter arrogantly brandishing a confederate flag inside the Capitol, somewhere it had never been flown before, not even during the Civil War.

In the background, adding a terrible poignancy, was a painting of President Abraham Lincoln.

It all made me sick to the pit of my stomach.

At the height of the mayhem, I emailed a senior Trump aide to beg them to make him stop this insanity.

‘Tell him to get on TV now, admit defeat and call off this outrageous coup,’ I implored. ‘It’s appalling.’

The aide, who it transpired hasn’t been at the White House for a number of weeks, admitted: ‘Hating it. Entirely predictable and so sad. Everything he achieved in the last 4 years wiped away. I can’t watch and can’t do anything to help. Wouldn’t have any impact even if I was there.’

Trump’s beyond help or advice now, even from close friends or long-time aides.

He’s jumped the shark into a very dark, dangerous, and unstable place.

Of course, I’ve always known he’s a very bad loser and a highly polarizing character with an inflammatory personality who revels in the rough-and-tumble of verbal combat.

But, I never imagined he would be capable of becoming what he’s now become – the deranged figurehead of a bunch of hard-right conspiracy-theory-fuelled fanatics intent on destroying American democracy.

And yet he has.

The only explanation for this insanity is that Trump himself has now lost his mind.

Even when he finally said something about the shocking scenes, it was to tell those committing serious crimes that he ‘loves’ them and they are ‘special’ people, and to double down on why the election had been stolen from him.

This was a deplorably incendiary response, guaranteed to pour fuel onto the raging fire, and prompted social media companies to race to suspend his accounts.

Yet as I write this, Donald Trump remains President with all the power that position affords him.

When he called me a week before the election, the first time we’d had any contact all year after I told him to ‘shut the f*ck up’ when he suggested injecting people with bleach to tackle covid, he sounded like the same person I’d known for 15 years.

If he tried to call me today, I wouldn’t take the call.

I’m a very loyal person when it comes to friends, however flawed they may be, not least because I’m no Mother Teresa myself.

But I’m done with Donald Trump.

I can’t remain friends with someone who says he ‘loves’ a bunch of violent Nazi sympathizers and white supremacists who’ve just launched a deadly attack on the epicenter of US democracy itself and thinks they’re ‘special people’.

Trump’s tolerated such horrendous people before, refusing to properly condemn them after incidents like Charlottesville because he craves their votes.

Now he’s stood full-square behind them as they committed an atrocity in his name – and praised them to the world.

Such a person should not be President of the United States for a second longer.” 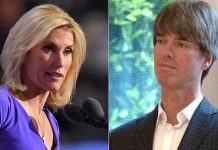 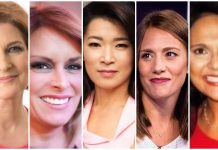