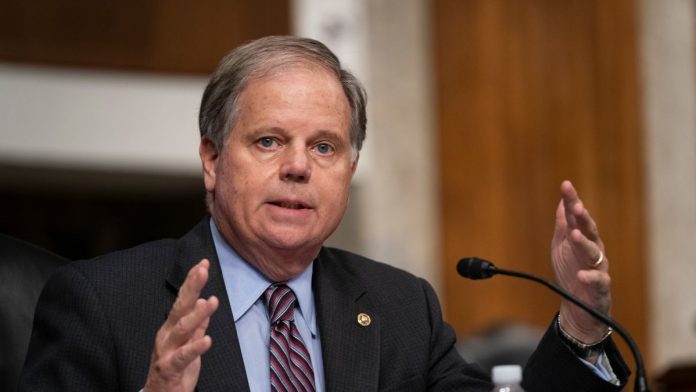 Biden is also considering Judge Merrick Garland of the U.S. Court of Appeals for the District of Columbia, who was denied a seat on the Supreme Court in 2016 by a Republican-led Senate, and Sally Yates, a former deputy attorney general, sources said.

Jones will be leaving the Senate in January after his bid for re-election failed. He would become the second Alabama senator nominated for attorney general in four years; he was elected to fill the Senate seat once held by the other — Republican Jeff Sessions.

Jones declined to comment Tuesday when NBC News asked if he’d accept a Biden nomination to be U.S. attorney general.

“I’ve made a point of not commenting on any of the nomination process right now,” he said. “They’ve got a process that they go through, and hopefully they’ll wrap some of that up pretty soon. We’ll see how it goes.”

Asked if he’d consider such a nomination, he said, “At this point, I think it’s better not to make any comments.”

Jones, who is white, is seen as an attractive nominee because of his track record on issues related to race and civil rights.

Former President Bill Clinton appointed him to be U.S. attorney for the Northern District of Alabama in 1997. In the landmark case of his career, Jones prosecuted two former Ku Klux Klansmen for the 1963 bombing of the 16th Street Baptist Church in Birmingham — a brutal crime that killed four young African American girls and was a galvanizing moment of the civil rights movement.

During his short time as a senator, Jones pushed through a bill to permanently fund historically black colleges and universities that became law in December 2019. He also sponsored a bill, signed into law by President Donald Trump in January 2019, which requires the public release of documents related to unsolved criminal civil rights cases.

Jones and Biden have a long relationship.

Jones introduced Biden, then a young senator, when the latter spoke at his Alabama law school. Years later, Jones worked with the Senate Judiciary Committee, of which Biden was a member. Jones was Alabama co-chair of Biden’s 1988 presidential campaign and helped raise money for his 2008 bid. Biden, in turn, was one of the few national Democratic figures who campaigned for Jones in his 2017 Senate campaign.

“I promised Doug I’d campaign for him or against him, whichever will help the most,” Biden joked at one rally.

Biden has faced considerable pressure to select an African American to be attorney general. On Tuesday, he is set to officially announce his choice of retired Gen. Lloyd Austin as the first Black man to lead the Department of Defense.

Yates has always been viewed as a leading contender — Biden even mentioned her as a potential vice presidential pick several times during the campaign.

But there are real concerns about the prospects for her confirmation if the Senate remains in Republican control.

Garland, a veteran jurist and a moderate, is seen as someone who could help restore the Justice Department’s independence — a Biden priority after criticism that Trump exerted too much influence over the department. His nomination would also allow Biden to appoint a younger judge to the critical D.C. Circuit of the U.S. Court of Appeals.

Sen. Lindsey Graham, R-S.C., who currently chairs the Senate Judiciary Committee, declined to comment on a potential Jones nomination. “We’ll talk about that after Dec. 14,” he said, referring to the date when the Electoral College is scheduled to elect Biden president.